The whole tasting took close to 1½ hours. A meat & cheese plate was available for an additional fee, but we had already eaten. Afterwards, we roamed the grounds, which took at least another 20 minutes! I highly recommend the winery for a few reasons- the scenery, the service, and of course, the wine. Pound for pound, solid wines across the board. The #flightfavorite for both Michael and I, was the 2013 Duckhorn Three Palms Merlot. That’s some good juice, my friends! 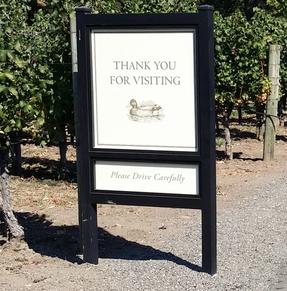 Since then, they have definitely broadened their horizons with different off-shoot wineries (Goldeneye; Paraduxx; and Decoy), and wines, (Sauvignon Blanc, Pinots, and even some sparkling wine).  So, go there for the Merlot, but stay for the rest of the wines! Tastings are by appointment only and appear to book up pretty quickly. The tasting room is a large white and gray house on expansive grounds of flowers, statues, and outdoor entertaining areas in St. Helena. It's gorgeous!

Duckhorn is definitely one of the more popular winery destinations in Napa, and for good reason……their MERLOT! During a time in the late 70s, where winemakers were using Merlot as a blending grape, Dan and Margaret Duckhorn went rogue and made the grape a standalone varietal, and it really paid off. They were also making Cabernet at the time, I mean we’re talking Napa here, so that’s almost a given, but Merlot was their focus. Why Merlot? They felt the varietal had such a soft elegance to it, and that it went with lots of different foods, without being overly powerful. If you’ve ever had a Duckhorn Merlot, you know the velvety feel that it has in your mouth. I’m guessing 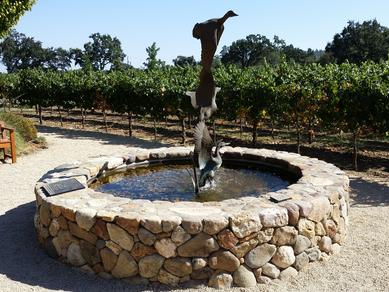 Miles from Sideways never had a Duckhorn Merlot- just saying. 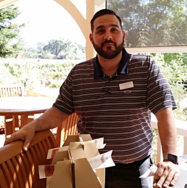 You can either taste in the main area, which consists of a large wine bar, or outside on the covered patio. We opted for outside, as it was such a beautiful day. We were immediately greeted with a 2015 Sauvignon Blanc by our server, Mark,

who was great and very knowledgeable. We went through quite a flight of wines, and we learned a lot about Duckhorn. Admittedly, it was my first time having anything from the Goldeneye line of wines, so that was exciting. 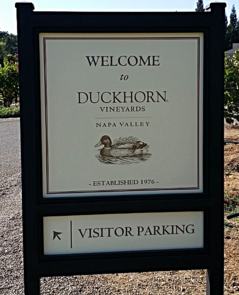