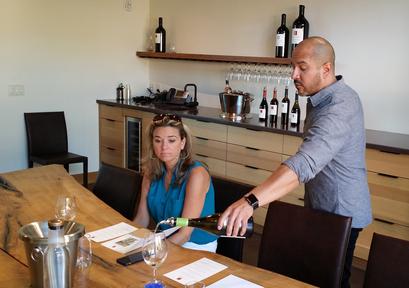 digging the CDP (a red blend), and the Syrah.

We continued to chat with T and get his back-history in the wine industry. He worked at one of the local wine bars prior to ending up at Halter Ranch, and we even knew a few of the same people! Which in a small town, I guess that isn’t super surprising. Anyways, he is a super nice guy and a superb wine host; if you visit Halter Ranch, be sure to ask for him. A truly great experience

requirements, as firetrucks need to have ample access to the winery. With the narrow two lane roads, bringing the wood to the locale was no easy feat! The bridge is actually a good symbol of what Halter Ranch prides themselves on being: innovative, self-sustaining, socially aware, and above all, preserving the beautiful countryside of Paso Robles.

from start to finish, it’s definitely a recommendation from us at Wine Problems! 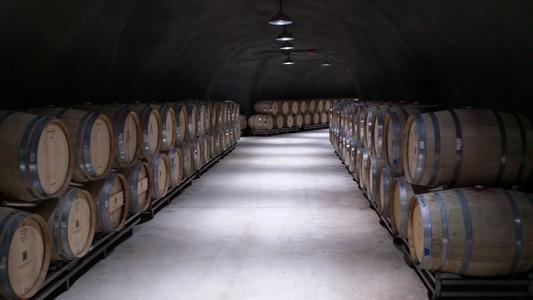 To get to Halter Ranch from the road, you need to cross their incredible, breathtaking bridge that they also use for winemaker dinners and weddings! It’s truly a remarkable structure. It was built in 2009 and they had to take all kinds of special considerations into its design; mainly for fire department 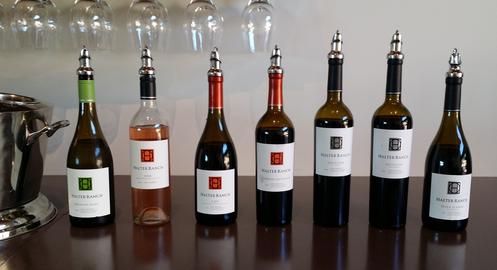 to and told to wait for your wine host in yet another beautiful room. Good grief, this place is incredible! “T” greeted us with a big smile, and with that, the tour had begun. T had a lot of information and history, but I won’t get into all of the details, because honestly, this is a place you need to see for yourself. Keeping it brief, the Ranch was bought by Swiss billionaire, Hansjörg Wyss. He made his fortune in the medical profession, and had a wide range of interests- one of them being wine! He fell in love with Paso and the people, and knew that this would be his next big venture.

Next on the tour was my favorite, the wine caves! So, so beautiful! The caves were built right into the limestone hillside, which along with the concrete in the walls and floors, acts as a natural cooling system. 20,000 square feet lined with rows and rows of wine barrels… it's truly a 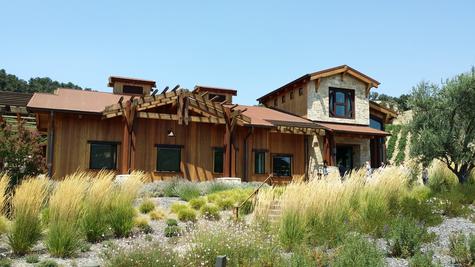 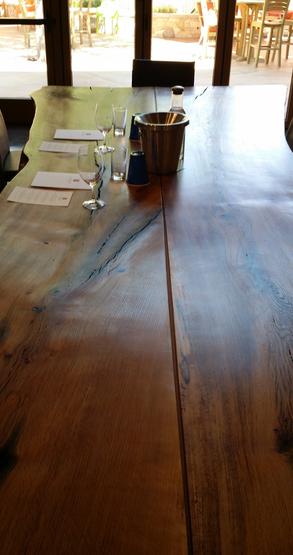 With a couple more steps, we were pretty much right back at the original tasting room. We had literally gone full circle!

Wait, did I mention that they have their own water filtration system, and that it is hooked up to every water fountain?
Yep, no “tap” water at Halter Ranch!

Rhone-style blends. Their wines are 100% estate grown and are sustainably farmed on westside limestone soils. It was our first time visiting them, and admittedly, we didn’t know that much about them. So, let me just say wow! Although we didn’t have any expectations, if we did, this visit would

The wine flight was SO good!  I should mention that their winemaker is Kevin Sass, a well-known name in Paso, as he was formerly a very successful winemaker for another major Paso winery.

Not going to lie, we were floored by their beyond reasonable prices on their wine! I was really

For additional photos of Halter Ranch, be sure to visit our Paso Robles Photo Album!

After our awing of the bridge, we arrived at their very large, and quite busy, tasting room.

We passed by tons of wine swag, including cookbooks, lunch baskets, and a refrigerator of cheese. Multiple tasting bars were scattered throughout the room. We were quickly attended 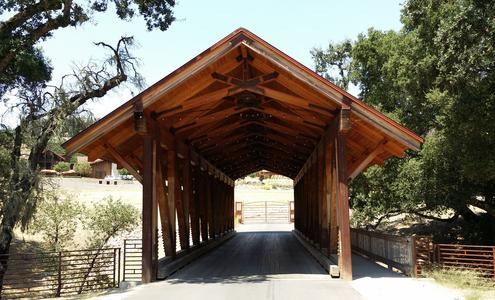 As we exited the caves, we ended up at a big outdoor kitchen decorated with hanging lights, and scattered tables and chairs... and,

a pizza oven! Apparently they have been known to throw parties there both for their club members, and their employees alike. It was really an awesome set up! 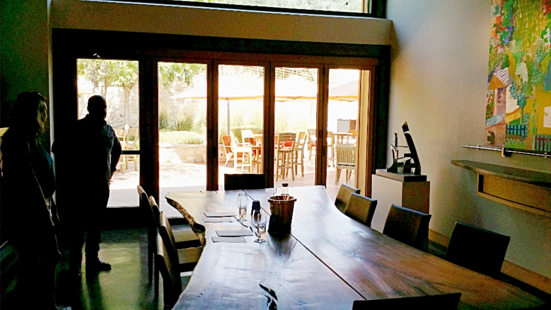 have exceeded all of them!

We were lucky enough to see the whole facility, from the crush pad, to a crazy top of the line destemmer/sorting machine, the fermentation room, laboratory, barrel storage…everything was state-of-the-art, spotless and oh, so pristine! It is truly a sight to see, so take the tour if you can!

Then it was on to my other favorite part of the tour, the wine! Our tasting took place in a private room with a super ginormous oak table! The table was made from a tree that had fallen by a nearby road, and was blocking it. Wyss saw it and immediately found a way to not only remove the tree, but to do something with it, instead of just making it into fire wood. This table was CRAZY heavy! You couldn’t even budge the thing, and it certainly must've taken a small army to carry it into that room!

If you are looking for a BEAUTIFUL winery, which is eco-friendly, has fantastic wines that are reasonably priced, some cool technology, and crazy sculptures, look no further!!! Located in the Adelaida District, (a bit of a trek, but a gorgeous drive!) Halter Ranch specializes in Bordeaux and

On our tour, we also got to peek in on the exclusive Wine Club Member’s tasting room, which, to say it is nice would be the understatement of the year! It is on the second level and adjacent to the winery.

In fact, there are large windows inside where guests can get a great look inside the production facility. The room is a fairly big space with a fireplace and plenty of comfy seating. Oh, and there are even some million dollar art pieces and sculptures. You know,

Not only that, but the energy source for most of this comes from nature itself. They've built solar panels to capture sun, and they use moving vents to capture the cool air at night. I am WAY oversimplifying, but just know that it’s truly impressive. Wyss believes in using as little energy as possible and maintaining the integrity of the land without abusing resources. He’s a very well-liked and respected part of the community, and a lot stems from his preservation of nature approach. 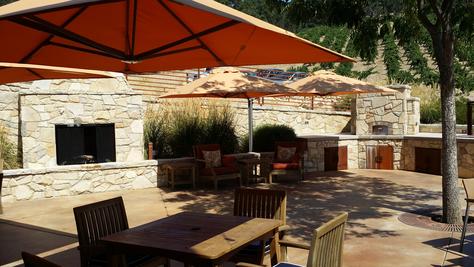