Kosta Browne is one of those wineries with a huge following, and an even larger waiting list!

I believe it's about a 2-3 year waiting list to be an allocation member, and that is just for their Appellation wines. KB produces four of those- three Pinot Noirs from the Russian River Valley, Sonoma Coast and Santa Lucia Highlands, and one Chardonnay from the Russian River Valley. Tack on an additional 3-5 year wait for their Single Vineyard designates- and there are nine!

Oh, and it’s 12+ years if you want to try the nearly impossible to get 4-Barrel Pinot Noir! This very special wine is a blend of their four best barrels, each coming from a different vineyard. More specifically, the four vineyards, among all of the vineyards that they source from, that seemed to 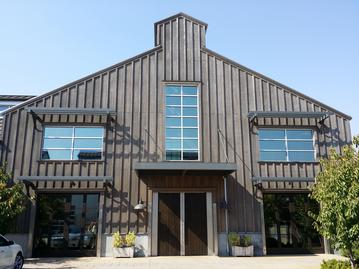 Something tells me it’s well worth the wait.

With that being said, sadly neither of us had ever tried even one of the fourteen Kosta Browne wines, however, we have several friends who are on their list and rave about them. As luck would have it, Michael went to school with their VP of Sales and Marketing, Jenifer, so he gave her a call and she was

We also got to try some pinot juice in different stages of fermentation, beginning with just being plain old grape juice! Actually, there was nothing plain about it; it was delicious, just a little sweet. We tasted out of a couple more barrels and concrete wine tanks, which had wines that were in various stages of the winemaking process, and it was so interesting to taste the changes. Personally, I find the whole process so fascinating.

After the tour of the facility, we went back into the house and got to check out my total dream

shine the most during that current vintage.

Unfortunately, nothing was available for purchase. #sadface 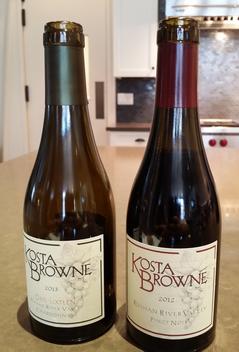 gracious enough to invite us up for a visit.

wine cellar! It was pretty spectacular! Pictures don’t do it justice; it’s really something that needs to be seen in person.

Appropriately, we moved on to the bottle of pinot. Wow. So THIS is what the fuss was about! Now I get it. #hooked. Jenifer continued talking about the guys, and how they are big into giving back to the community and supporting charities, and are also big music lovers. They sound like really good guys who just so happen to also make amazing wines! We then got to take the tour of the facility, which everything happens right there on the same lot; crush pads, vats, barrels, etc.

We got to see a lot of action, including some grape stomping ala I love Lucy.

KB doesn't have a tasting room, and they are not open to the public, but they do like to accommodate their list members whenever possible, by appointment. We truly enjoyed our visit and can’t thank Jenifer enough for her time and hospitality. Sadly, but not surprisingly, they were completely out of wine, so there wasn’t any for us to buy and take home. However, we did sign up for the allocation list, and in just 12 short years we’ll be all over that 4-Barrell!! LOL

We scheduled our visit for the first day that we arrived in Sonoma, and we were in for quite the treat, as it was full blown harvest mode for them! We started in this beautiful kitchen with a large glass fire place and long formal dining table, which they use quite often for hosting dinners. Two bottles were waiting for us, 2012 Russian River Pinot Noir and a 2013 One Sixteen Russian River Chardonnay. Admittedly we were a little giddy, I mean it was our first time with KB after all!

We started with the Chardonnay as Jenifer gave us some history of the winery. The owners Dan Kosta and Michael Browne were servers at the same restaurant back in 1997 who shared a love of Pinot Noir. They decided to buy a barrel and some grapes, and the rest is history!