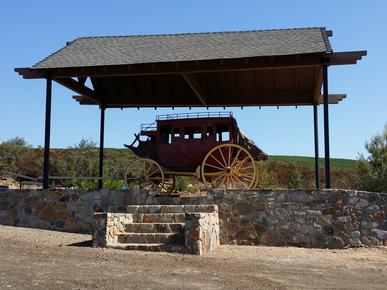 This wine tasting came about in kind of a random way.  We attended a wine event, earlier this year, and one of the wines really grabbed our attention- 2014 Krupp Brothers Chardonnay- Stagecoach Vineyard. It was SO good! The rep for Krupp Brothers was at this event, and had mentioned that if we were in Napa, to look her up. Honestly, neither of us had previously heard of Krupp Brothers and it wasn’t really on our radar to visit. Sometimes that’s what intuition is for, right? So, just before our Napa trip, Michael reached out to the rep and we were all set for 11 a.m. on a Monday. Let me start with saying this is not your normal tasting experience. What was my first clue?  That would be meeting our wine host, Dan, in a parking lot of a grocery store. I’m sorry, where?! But I’m always up for a new wine adventure, so why not?

We met Dan in the parking lot, which conveniently wasn't far from where we were staying in downtown Napa; he was there right on time. We got into the back of his four wheel Suburban, and off we went…..without having the slightest clue of what we were doing. Dan was very informative of the history of Krupp Brothers, and gave us the rundown as we drove, including the somewhat odd pickup location for the tasting. The Krupp Brother property is WAY up in the hills. I mean WAY up! The roads are extremely narrow and rocky, so to have private parties driving to and from a “tasting room” without knowing the roads, or even worse, drinking and driving, is not something they were going to allow. The advanced bookings allow them to make sure the roads aren’t

Some of the details are outlined below, but you should really go here and see/hear for yourself! Soon after, Jan asked his brother Bart to join his endeavors, and they’ve been working what’s now the Stagecoach Vineyard ever since. A few interesting notes about the winery and the brothers:

but Michael was not happy about this).

After spending a lovely time up on top of the wine world, it was time to make our way back down the hill. The way down seemed a little quicker of a trip, and next thing you know, we were back at the grocery store parking lot. We said goodbye to Cousin Dan, (because that’s what we call him now), and Michael and I couldn’t have felt more appreciative of that whole experience. Truly a game changer, people, and a must to visit next time you are in Napa!

*THIS JUST IN! - We were just informed that Krupp Brothers just opened a tasting room in Downtown Napa, so trying their wine is now easier than ever!

2014 Chardonnay (this was the original wine that that brought us there- we had to have more!)

•    They only keep 5% of the grapes for themselves.
•    They have 108 purchasers for the rest of the fruit, including their Cabernet which sells at $20K a ton! To put that in perspective for you, the average price of Napa cab grapes in 2015 was $6,300 a ton, so buyers are paying more than three times the average for this prime fruit! Ironically, ever since we visited the Stagecoach Vineyard, it keeps getting brought up to us from other wine companies, bragging about where they get their grapes from!
•    They built the road through the hillside to get the fruit up and down the mountain (you cannot truly understand the extent of labor of this unless you take the tour).
•    He spent most of the first years looking for water for the crops! He finally found an underground river 450 feet deep after breaking expensive drill, after expensive drill….
•    There are blue birds everywhere, and also snakes (granted we didn’t actually see any snakes, 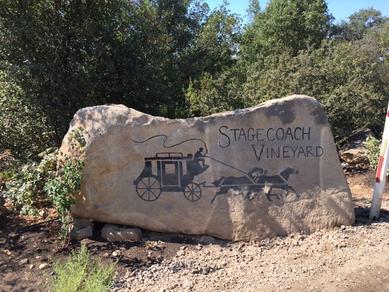 cluttered with back and forth traffic.

The drive was a good 40 minutes, so we had some time to talk before tasting the wines. We learned that the Krupp Brothers are Jan and Bart. Jan is a doctor who had a passion for wine, so he moved to Napa and planted a 41-acre home vineyard. The amount of work that went into this, including finding a viable water source, is crazy!

We traveled for miles on small dirt roads like these.

We finally reached our destination, which consisted of the most incredible 360 degree views of the Napa Valley and the Stagecoach Vineyard. There was a table set up outside (I guess that’s an obvious statement), and Dan went to grab the wines for the tasting. Yay! The wines were all so, so good, and the whole experience of drinking them on top of this mountain was just amazing. Picking a flight favorite was tough, but I’m going to say it was the 2009 Veraison Red, a blend of Syrah, Cab, Merlot, Malbec, Cab Franc, and Petit Verdot. We were so thrilled with the wines we tasted that we even bought a couple that we hadn't-their Sangiovese, and the 2010 Veraison Red. 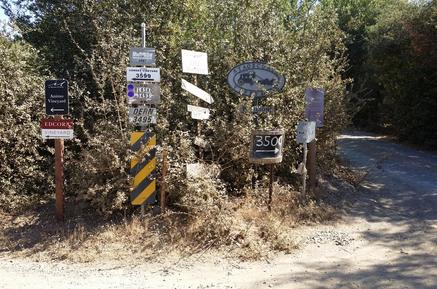