Library Room: This is a private tasting room for guest and members to taste their wine surrounded by Raymond Cabs as old as 1974. You’re literally surrounded, floor to ceiling, by

After meeting our gracious wine host, Cezanee, and given some info on what wines we’d be tasting, Raymond's Media Director, Dylan Elliott, joined us and asked if we would like to tour the grounds? Um, YES please! So we grabbed our wine and followed him around for a good 30 minute tour. You can find a fantastic photo gallery, or even take a virtual tour on their website, and see the areas we visited.

Corridor of Senses: This was really cool. It’s a long hallway lined with touch stations where you can physically feel different textures compared to how it feels or tastes on your palate - examples would be velvet, leather, and silk. They also had the different colors of wine on the wall, along with a multitude of scents associated with wine. It’s a very unique concept.

The Red Room: A wall-to-wall-to-ceiling red room with red velvet furniture. The only thing not red was the leopard print carpeting. Super sexy! There is a LOT to look at in this room. I really loved the couches and pool table.

The wines were fantastic. We had a flight that consisted of four cabs and one chardonnay. It was so interesting tasting four different cabs, from the same winemaker, from different soils and regions, and how different they can taste from one another! Wine never ceases to amaze and intrigue me with its versatility. A quick side note, John Legend recently teamed up with Raymond and just released a collection called LVE. Can’t wait to try it!

It was SUCH a fun tour. We really can’t wait to go back and spend some more time there. We definitely want to do the Blending Seminar and make our own wine- that looked like a blast!

Dylan says they have some pretty awesome parties there, which I can only imagine! Wouldn’t

Let me first say that Raymond Vineyards was not originally on our Wine Problems 2015 Wine Tour itinerary. A friend of ours gave us a bottle as a gift and told us it’s worth visiting while we’re up there. We checked out the website and thought if we have time, we’ll squeeze it in. So we squeezed, and wow, Raymond Vineyards is so UNIQUE! I mean that in the most flattering way possible! This place has everything and I know I won’t be able to do it justice because it is one of those places you have to see to believe, but I’ll do my best.

On our way in, we passed by a “Theater of Nature,” which sadly we didn’t have time to enjoy.

We were escorted to "The Crystal Cellar," which was mainly stainless steel, to begin our tasting.

This room was ornately decorated with crystal chandeliers and other light fixtures, giving adequate reason for the name The Crystal Cellar. Nothing super unique or surprising there….but what WAS unique and surprising were the life-sized dolls dressed in bondage gear and feather boas, sprinkled throughout the room! I wasn’t kidding when I said this place was unique!

Blending Room: (You make your own wine and label, and get to keep a bottle!) We only got to take a sneak peek through the windows because there was a seminar going on. The people in there were dressed in all silver foil including "chef hats." Totally looked like something from Willy Wonka!

Rutherford Room: This room was filled with different maps and soils of Rutherford. There is a giant 3D map in the center of the room, and descriptions of each of the soils. Very educational. 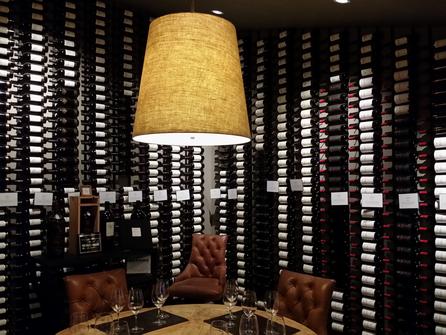