2013 PNX Pinot Noir- *opened this bottle on Thanksgiving; it was fantastic!!

We started in the vineyards, behind the winery and tourist craziness, as Dana gave us the history of Robert Mondavi. It’s such a great story- an Italian guy going against his family and taking a HUGE risk for the sake of his dream to make his own wine. A risk that obviously paid off handsomely and forever changed how the world looked at California wines. He was truly a Renaissance man who

Dana was our wine host and he’d been with Mondavi for a very long time. His experience showed through, as our wine tour was very well thought out, and thankfully away from the masses. My two cents, (sorry parents), but I don’t think kids belong at wine tasting rooms. My cats would probably have more fun than a six-year old at a wine

just the juice, so that was pretty cool.

Then we went to the barrel room which is just gorgeous. Seriously, the architecture on this property was very well done (please be sure to check out our Napa photo album for additional pictures of this beautiful winery).

After the tour, we headed back out towards the vineyard where a table had been set up for us to finish out the 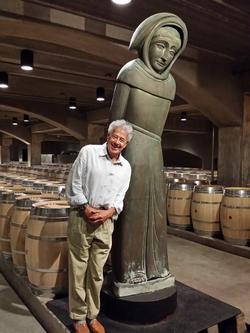 tasting. Dana brought us some cheese, crackers, meats, and olives to snack on- such a nice and unexpected touch! Sitting there in the middle of the quiet vineyard; unpicked grapes all around us- we even picked a couple and tasted them right from the vine! Eating the food, and drinking this fabulous wine, was just such a great experience! We were able to taste the Mondavi wines that you can’t find at your local store, as well as some that you could. We ended up buying quite a bit of wine, including a bottle for one of our friends who is a huge Cabernet lover (remember the '12

After the history run-down, we took a few pics in the vineyards, and off we went to the wine making facility. It was harvest time, so there was some action going on. We got to drink a Pinot that had just been crushed the day before- it was cloudy and sweet! First time we had ever had

tasting, (seriously, my one cat loves smelling my wine). But, if there’s no way around it, please keep an eye on your children. Lots of breakables in wine tasting rooms!  And again, that’s just my two cents.

Lastly, if you’re lucky enough to get Dana, you’re welcome. 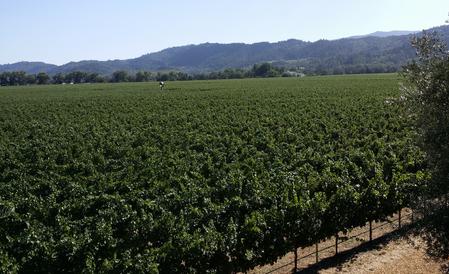 loved to cook and entertain. One of his main reasons behind starting his winery was to bring wine and food together. Back in the day, wine was for the rich…it was an expensive luxury that not everyone could afford. In fact, cocktails were what the Americans were drinking, people in Europe drank wine, (think Mad Men era).  He wanted to change that and make wine accessible to all people. Which, he did! It’d be hard to find someone who hasn’t heard of Woodbridge (Mondavi’s lower-priced brand) or Mondavi. In fact, growing up, it wouldn’t be unusual to find a bottle of Woodbridge White Zin in our fridge.

Yes, it’s a big tourist destination and it gets very busy, so I’d suggest perhaps looking into a private tour or maybe go on a weekday? But there is no doubt:

•    that the grounds are gorgeous; you can feel the wine history in every inch of the architecture.

Our visit to Robert Mondavi was probably the biggest “surprise,” out of all of the wineries that we went to, on our recent Napa trip. I say that because from the minute we pulled into the parking lot, and saw all of the tour buses, and tons of kids running around, I assumed I was going to hate this experience. Granted it was a holiday weekend, but I have a feeling this was the norm for this winery. With that being said, it’s not that surprising, since Robert Mondavi is THE Grandfather of Napa! He put Napa on the wine map of the world, and his wine can be purchased is at pretty much 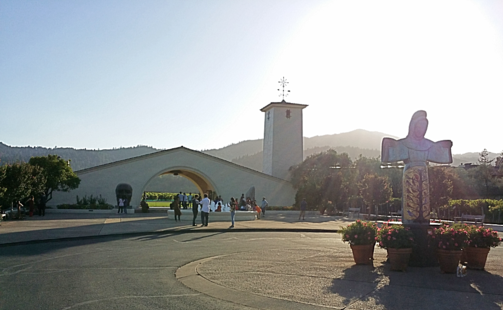 He was also the co-creator of the Opus One winery, which if you haven’t had, the wines are pretty remarkable. Not cheap, though!

It’s quite the range from Woodbridge Zin to Opus One, eh? But I think that speaks a lot of his character and again, wanting to make wines for the whole spectrum of the wine consumer world. You have the lower priced bottles that can be found just about anywhere that sells wine, to one of the most sought after, higher end wines, Opus One. The Mondavi Reserve list is nothing to scoff at either! We tasted AMAZING 2012 and 2013 Cab reserves.

•    some truly great wines in all price ranges.
•    there’s a great wine shop with tons of swag.