We were provided with these super cool booklets that provided all kinds of information on the wines we were tasting; from details of the vineyards soils and weather conditions, to tasting and pairing notes, and some background on John, Doug, and Elias. Every winery should give these out! You can actually check out its contents via this cool online version. 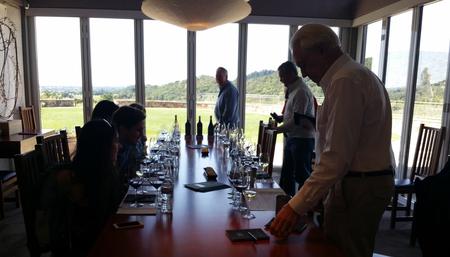 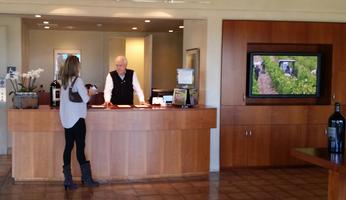 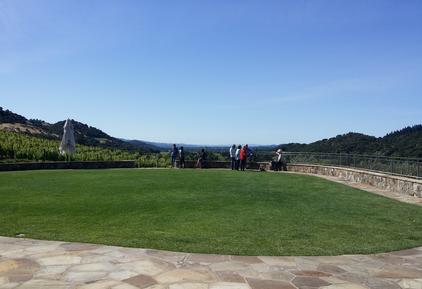 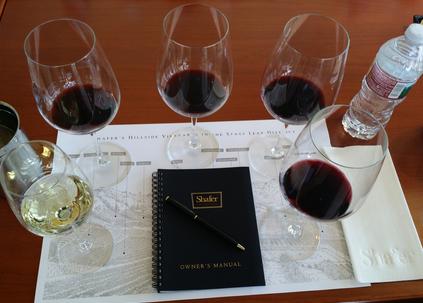 First of all, let’s talk about the property. It’s ginormous! It’s on this vast expansive land with a view of a small lake and surrounded by vineyards. Easily one of the prettiest views we’ve seen in Napa.

We were early to the appointment (yes, tastings are appointments only) but somehow we were the last to join our group! Apparently we weren’t the only ones who were eager beavers!!! 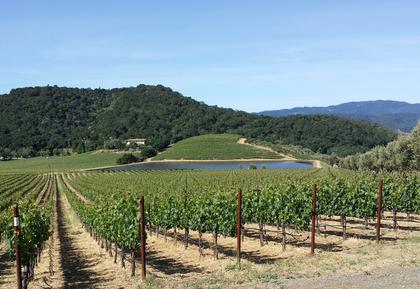 Next came Relentless, which is predominantly a Syrah with a small percentage of Petite Sirah. It is named after Elias' "relentless pursuit of quality," and it had just scored 98-100 points from Robert Parker! And as if all of those weren't mind blowing enough, we finished up, of course, with their 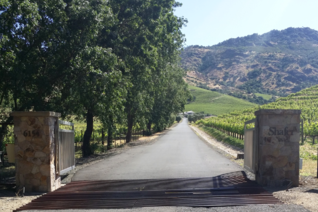 Ahhhh Shafer.....you did NOT disappoint!!! Neither Michael nor I had ever been there before, and in fact, Michael had never even had any of their wine. Yet, this was easily the Napa winery that we were anticipating going to the most. From the get-go, this experience was awesome!

our gamble paid off, as this ended up being a fantastic wine!

2015 Red Shoulder Ranch Chardonnay
2013 Relentless
2012 Hillside Select
2016 Eighty Four Albariño- This is Elias and Doug’s side project. They started making wine together in 1984 and love experimenting and trying new things. This was a #BlindPurchase, but 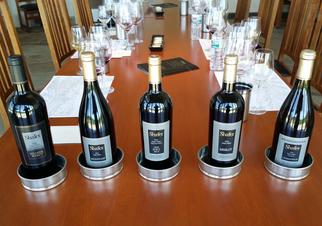 So off we went back to the winery where a lovely table had been set up for us in this large room with windows as walls. So, so beautiful and we still get to have a view! And then the tasting began….wow. Everything was incredible, from their Red Shoulder Ranch Chardonnay, to their Merlot, to their One Point Five Cabernet.

Quick side note - If you are interested in visiting Shafer, you definitely need to make reservations well in advance, as they book up rather quickly; plus they aren't open on weekends. We couldn't get there on our previous trip to Napa for both of these reasons.

Our group was on the outside lawn, which is elevated, thus enhancing our view of the vineyards. Bob was our wine host, and he couldn’t have been nicer. He’s worked at many of the big wineries (his resume was quite impressive!), but really fell in love with the people at Shafer. He talked about the vineyards, namely the Sunspot Vineyard, that have brought Shafer so much notoriety with its Hillside Select vintages. We got some background about John Shafer and his love of wine, and how Doug Shafer, John’s son, has since been passed the torch as winery President. Elias Fernandez has been the winemaker since 1994, and doing a mighty fine job, I might add! But of course, we

We even got to meet Doug briefly, as he was working in his office nearby and popped his head in to say hi and to welcome us there. He seemed really nice and genuine, and we chatted for a few minutes. After the tasting, we went out to the foyer, where we got to try their newly released, Firebreak, dessert wine (which is made from 100% Cabernet Sauvignon and can only be purchased at the winery). It was paired with a chocolate truffle from a local shop- yum! Michael said that this was the best Port that he ever tasted!

Then yet another treat was awaiting us- Andy, who is head of their media and trade department, showed us around the grounds. We got to see the whole facility, including the crush pad, beautiful wine caves (which went as far as the eye could see), and the barrel room. We even got to play with Cody, which is the Shafer’s Golden Retriever. #WineDog

After your tasting, you are given the opportunity to purchase the wines of the tasting, which is awesome because you wouldn't be able to get some of these anywhere else. #Perks  Some of their wines, especially the Relentless and Hillside Select, are tightly allocated and sold out; even their members aren't able to order more. After making our purchases, we took a few more pictures, and then, sadly, it was time for us to go. Shafer was truly one of the major highlights of this trip!!

Second side note- They have some great looking seasonal recipes on their website, with suggested pairings for their wines. #PerfectPairings

needed to taste the wine to make sure all was well with Mr. Fernandez. #ResearchTime