We walked into this beautiful house with all windows, and were seated at a long wooden table, where three glasses of wine awaited us. We knew very little about Vérité, so Victoria, who is also a Sommelier, gave us some background on how it came about. In the short version, Jess Jackson (of Kendall Jackson notoriety) and the French winemaker, Pierre Seillan, decided to team up to make the crème de la crème wines from Sonoma. Pierre has years of experience in Cab Franc, Merlot, and Bordeaux style blends, but was frustrated with the strict French restrictions. His need for artistic freedom mixed with the terroir that the vineyards possessed at the Jackson property became a match made in 100 point Robert Parker heaven! We should all write a very nice thank

very charming with a very heavy French accent, which I admittedly had trouble following at times, but we got to express our admiration of his winemaking skills and he was gracious enough to take a pic with us. Too bad I look like a total geek in said pic. Why is it that I always get so dorky

We had two unexpected treats during our tasting; one was when our hosts disappeared from the room and went down to the cellar, only to return with a bottle of their 2006 Cabernet. Interestingly enough, the 2012 was just as good! It really showed the longevity these wines have; in fact, Robert Parker claims that some of Vérité's wines can be cellared with an upside potential for 40-50 years! The second surprise was when the man himself walked through the door to join the tasting- Pierre! He had been out in the vineyards checking the fruit, as any great winemaker would be doing at harvest. He was

One of the most memorable stops on our winecation was Vérité (pronounced vair-ah-tay), which means “truth” in French. Shaun Hile, the Sommelier from Morton’s The Steakhouse, in Beverly Hills, had recommended we visit the winery while up in Sonoma, and we are ever so grateful that he did! It didn’t start off well, as we were nearly 45

What we would have bought if we had won the lotto:

Cases of everything we tasted!

you note to France.

minutes late to our tasting. We can’t stress enough how important mapping out your wine visits are. We had started in the square at an 11 a.m. tasting, and thinking we would have plenty of time for our 2 p.m. tasting at Vérité.; we ended up rushing and we were stressed by the time we got there. Even though we contacted them to let them know, we still felt terrible making them wait! That being said, our two wine hosts, Victoria Price and Justin Anderson, couldn’t have been more hospitable and understanding; admittedly, they were glad that we had called ahead. 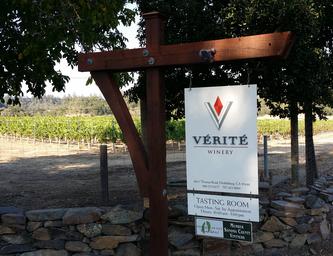 Each wine was absolutely exquisite. I mean, mind -blowing exquisite. Liquid silk with the perfect balance of luscious fruit and just the right amount of acidity... we really couldn’t believe what we were tasting... and trust me, Wine Problems have tasted some mighty great wines! Oh, and did we mention that Robert Parker has given ten of their wines a perfect 100 point score, including the '12 Cab and '12 Cab Franc that we were drinking!

equally, but ultimately decided on the Cab Franc because it was easier to justify it in his head buying the 100 point wine (the Merlot had scored a 97, but probably deserved a 100 too)!  It was a little too steep for my pocket book, so I passed this time around, but man, I really, really loved that Merlot! Truly a unique experience and some exquisite wine, and we highly recommend it.  Just go in knowing that the wines are a bit pricey!

Oh, and as a final tidbit, the 2013's recently came out and the Merlot scored 100 this time around, so Michael is already budgeting that into our next Sonoma trip! The Cabernet also scored a 100 for its second consecutive year, so now Vérité has twelve perfect scores under their belt! The 2013 Cab Franc only got a 99 this time though....only.  LOL 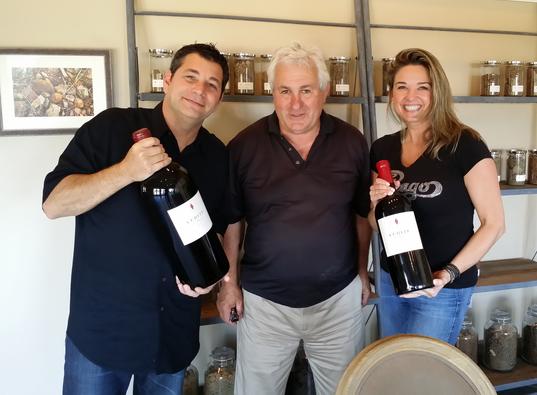 And then it happened- we had yet another Wine Problem thrown at us! Which wine to buy?! If our pocketbooks were plentiful, we would have easily bought them all! Unfortunately for us, that is not the case, and at $390 a bottle, these wines are relatively expensive, so, we had a real dilemma. Michael narrowed it down to the Cab Franc and the Merlot, which he loved 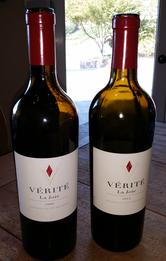