AUTEUR!  Yup- all three of our final scores had Auteur as the winner, but honestly once again, the REAL winner was us! Both of these Chardonnays are wonderful, either paired with food, or on their own. We won't stop there though, because we're 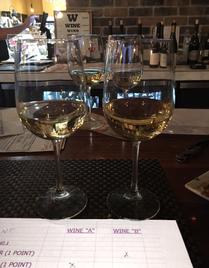 So once again we turned to our friend, John Fanaris. John is a level 1 sommelier and also the owner of Rustic Kitchen, where we have held the previous two BvB competitions. Rustic Kitchen just got their beer & wine license, so we asked John if he had anything that would be a good contender for the Adelaida? Sure enough, he did not let us down- it just so happened that one of the Chardonnays that he was serving was perfect! John chose a 2014 Auteur Chardonnay, which at $35, was close in price range, and relatively similar with regard to the oak barrels used. It was time to get this battle started, and since both chard brands began with the letter "A," we appropriately decided to call it, "The Battle of the ChardonnAys!" 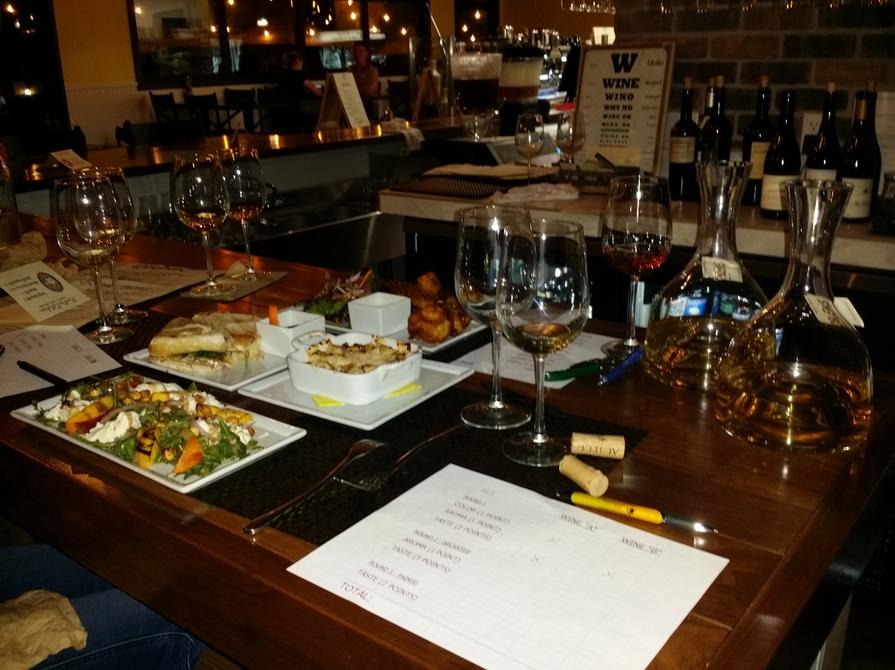 Did we mention that we LOVE the food at Rustic Kitchen?!

Well it's summertime and you know what that means- the whites and the rosés are in heavy rotation! Because of that, we figured it made perfect sense to kick off our summer edition of Bottle vs. Bottle with a nice, chilled Chardonnay. There were a few different ones that we were considering, but having recently fallen in love with Adelaida's 2014 HMR Estate chard, this was the perfect excuse to pick up another bottle! Truth be told, another one of our new favorite chards is Melville's 2015 Clone 76 Inox, but putting that head-to-head against the aforementioned Adelaida presented two problems: 1.) it was a different vintage, which goes against our eligibility rules, and 2.) it is a chard that is made using stainless steel barrels, so it just wouldn't have been an appropriate match against the Adelaida, which is fermented in oak barrels.

We had determined beforehand that the winner of this edition

Now we mentioned in our previous BvB, that we were starting to notice some consistency... and that consistency was the inconsistency! Well believe it or not, BvB 3 was no different! Once again all three of us judges did some "flip-flopping." Nicole went with "Wine B" as her pick in rounds 1 & 2, but switched to "Wine A" for the 3rd (pairing) round. Michael picked "Wine A" in round 1, but flipped to "Wine B" for rounds 2 & 3. And John, who picked "B" in the 1st round, flipped to "A" in round 2, and then switched back to "B" in the last round, so as you can see, everyone was all over the place! 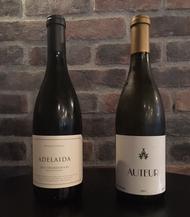 would go on to Bottle vs Bottle 4 and take on another Chardonnay that we love- Cakebread! So stay tuned and in a few weeks we'll see if Auteur will take the Cake?!

Before we announce the winner, what needs to be said here is that all three of us literally could have gone either way at any point- both wines were so good and we were all on the fence, every single round as to which one to pick? Oh, and just a reminder that all BvB's are 100% blind tastings; we don't have any clue whatsoever which wine we are drinking until the scores are all tallied, and we open the accompanying closed tags on the decanters. So which wine won, you ask? Well when the smoke cleared and all the points were tallied, all three judges were in-sync with the winner, and that winner is.....

Wine Problems would like to thank John & Noelle Fanaris, and the great staff at Rustic Kitchen,

In case you were wondering what our food pairings were, we all shared several items between the three of us, including: a Grilled Peach and Burrata Salad; Turkey Panini; Avocado Fries; Crispy Cauliflower; and Fish & Chips (sans chips). Oh, and there might have been some cheesecake in