THIS JUST IN!  Since our Napa visit, in Issue #222, Robert Parker/The Wine Advocate awarded Mike Smith four, 100-point perfect scores, for his 2013 Cabernets!

In the words of Robert Parker..."Here's to You, Mike Smith!"

My love of wine began with drinking it.  The concept of grape growing and wine making was the least of my concerns, as long as the wine tasted good.  Admittedly, I was in my early 20s, and had a very young pallet, so I use the term “good” loosely.  But we all have to start somewhere, right?

One of the many reasons why this trip to Napa was so special was that it took my love of drinking wine to another level. On the various tours we took with the wineries, we learned a lot about the growing and harvesting side of winemaking; from the different irrigation methods to the many different types of soils. Then, to have the opportunity to sit and talk with someone who takes the grown grapes and makes them into wine and listen to their side of the process, was truly fascinating. One such person that we had the pleasure to meet with was Mike Smith, a very highly acclaimed winemaker who is on his 16th harvest. Mike was quite humble, with a matter-of-fact outlook that he is a winemaker who only wants to make great wine....and wow, does he ever.

One of the main reasons we sought him out was our introduction to the Patiné label. Mike is the winemaker for Patiné, which is co-owned and founded by Jim Fox of the Los Angeles Kings NHL franchise. As Kings fans, we were intrigued by this hard to find Pinot, which has a textured label wrapped around the lower portion of the bottle, that resembles the outside core of a hockey puck (cute right?). After much determination, we found it, tried it, and fell in love with it. This is definitely one of the most well-balanced and complex Pinots that I’ve ever had, for sure. That said, we knew we would love to somehow intertwine Patiné into our Napa trip. So we reached out to Mike, who was gracious enough to find some time to meet with us, and thus, our wine tasting with him came to life.

His attitude made this an intriguing question and answer session. He was straight to the point. He didn’t have a favorite varietal that he liked to work with. He didn’t find any particular varietal more challenging over another. He didn’t prefer any of his wines from the many wineries he works for (or has worked) for over the others. While it would have probably been bad business to say he did favor one over the other, I had no doubt that he was being 100% honest. His goal is to make stellar wine. Period. In addition to Patiné, Mike currently makes wine for several wineries including: 12C; Carter Cellars; Quivet Cellars; Ancillary Cellars; Scarlett Wines; Becklyn Cellars; and his own label, Myriad Cellars.

For our second spotlight this month, we decided to feature both a person (people actually) and the thing of which they are associated with. In this case, it is one of our favorite Pinots, Patiné.

I’m not going to lie, there was a lot of the information he provided that went straight over our heads. Quite possibly our enamorment with his wine could be partially to blame for this. Sure, we could tell you some of the technical details that Mike mentioned to us, but the truth be told, the wine really spoke for itself! Now in case you were wondering what a 100-point winemaker‘s Tuesday night go-to wine is? It’s “whatever his wife is pouring.” We were also curious as to how long he prefers to age a wine before drinking it? Of course it depends, but generally speaking, he likes to give them 5-10 years. 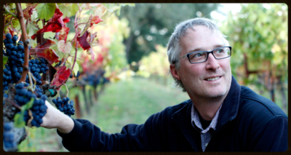 In hindsight, I wish we hadn’t planned another appointment after his. For one, we could have listened to him talk about wine for as long as he would let us listen!  And secondly, the next appointment seemed rather disappointing after our amazing experience with him. Not only did he let us try his 100-point Cabernet Sauvignon, 2013 Myriad Cellars Beckstoffer Dr. Crane Vineyard (wow!), but he also treated us to a few Patiné barrel tastings. THAT was pretty cool. It was so interesting to see how different the exact same wine can taste, when a different barrel type is used.

All and all, it was a very unique and special opportunity to hang out with a really cool guy, who happens to make great wines. We are very grateful for his time (and wine)! Thanks Mike!.... and if you want to see Mike and Myriad Cellars in action? Check out this video!