The event was held to introduce the upcoming release of their 2013 vintage, Single Vineyard Designate Pinot Noirs to Patiné's mailing list members. This included their two existing Pinot Noir's, Sun Chase and Gap’s Crown, as well as their new Pinot, Soberanes. Being quite the fan already of their Pinots, we readily signed up, as seating was limited. Our friends John and Noelle Fanaris signed up as well, which made for a perfect mid-day wine double date by the beach.

We were warmly greeted by Patiné co-owner Susie Fox, and then we wondered over to a table where our friends were already seated. As the other co-owners Jim Fox and Dean Nucich took turns speaking about Patiné, their story, and their visions, we took sips from the three wine glasses they had simultaneously presented to us, each filled with a different Patiné Pinot.

We nibbled on Darren's hand selected cheese and charcuterie plate, and enjoyed all three wines in different ways. It was fun discussing amongst ourselves, figuring out which of the three was our favorite, and which one changed the most over the course of the tasting. All of us had our favorite by the end of the tasting, although I can’t guarantee it was the one that we initially preferred. Personally, I liked the Soberanes the best, while Michael's favorite was the Gap's Crown.  However, you really can’t go wrong with any of their wines! 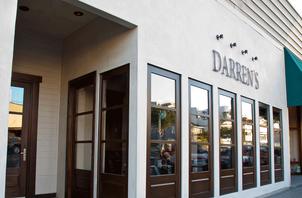 On October 10, 2015, Patiné had a exclusive preview wine tasting event at Darren’s in Manhattan Beach, California.

CLICK HERE TO GO TO OUR SPOTLIGHT ON PATINÉ >>>