Cabs that he has made for both Myriad and Carter.

We went to the Envy tasting room mainly to visit our friend, winemaker extraordinaire, Mike Smith. It was harvest time, so of course that’s exactly what any busy winemaker would want- friends dropping in. LOL. We did contact him ahead of time and knew his time would be limited with us, but we got to hang out with him for a bit. We enjoyed the wines being poured at Envy and caught up on how things have been going for Mike since our last visit. Mike was our very first Wine Problems Spotlight and the first winemaker we had ever interviewed. I must say, it is pretty cool interviewing a multiple 100 point winemaker! Not to mention that he’s such a cool guy; we really appreciated the time he set aside for us.

* We would have bought a lot more, but we already had shipments of both Carter and Myriad that were due to arrive in the next few weeks!

ridiculously amazing wines??!! Mike has scored 100 points, from Robert Parker, on some of the

Today we were definitely in for a treat….between Mike, Mark, and the Envy wine host, Mark Bordi, we tasted some INCREDIBLE wines, including some of the Carter and Myriad Cabs that were going to be in our upcoming shipment. We ended up staying for quite a while, then, Mike had to get back to the grind.

So I should back up a little. Envy Wines is a joint venture between Mark Carter and Nils Venge. Nils is well known as the superstar winemaker responsible for receiving the first “perfect score” on a domestic wine from Robert Parker, while at Groth in 1985. Mark pours his own label, Carter Cellars, from the Envy tasting room. Mike Smith is the winemaker for Carter. Mike and Mark have their own joint venture, Ancillary Cellars, which Mike is also the winemaker for. Myriad also works out of Envy, and that is Mike Smith’s label. Phew!!! Still with me?! So, yeahhhh…Mike Smith is a BUSY guy!!!!!  And have I mentioned that he makes

Envy is a quaint tasting room that consists of a long bar with plenty of standing room available. There are also small seating areas, both inside and out. It’s in Calistoga, which is a bit of a trek from downtown Napa, so plan your day accordingly by hitting up other wineries that are in that region. Envy is open seven days a week from 10:00 am to 4:30 pm.  You may want to call ahead and ask what they are pouring, and if you are able, we definitely suggest trying some of the Myriad and Carter wines while you're there too! Contacting the Myriad Cellars, and/or Carter Cellars peeps, in advance, might help to ensure that, and they are usually happy to meet you at the Envy tasting 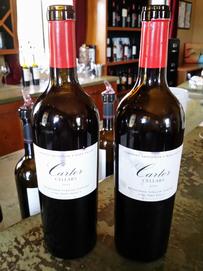 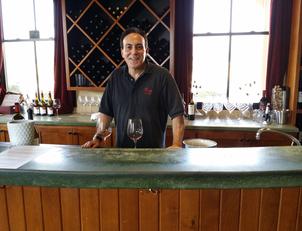