1998) by acclaimed winemaker, Ehren Jordan, and his partner and wife Anne-Marie Failla.  I knew of his work from him being the winemaker for Turley for many years, which he considered his “day job," while he was getting Failla up and running. Between needing to be in Sonoma and Paso Robles so frequently, he actually acquired a piloting license so that he could fly himself as needed, due to the hectic schedule.

It’s quite a change, going from Paso Robles Zins to Sonoma Coast Pinot Noirs and Syrahs (their flagship is Estate Syrah), but he clearly makes it work. In fact, it seemed to pay off- in 2008, Ehren was named the San Francisco Chronicle's Winemaker of the Year! 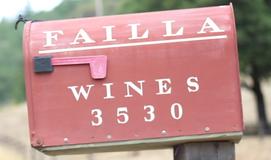 The wine tasting at Failla (pronounced FAY-LA) is available by appointment only and takes place in a very intimate setting, inside of an old house. We sat on couches in the quaint living room with our wine host, Collette, as she explained the history of Failla.  Relatively speaking, it’s a rather new label (its first vintage was in