the pictures)! We walked into the main reception area, which was very home-like, including a spiral staircase, large fireplace, and a balcony with some great views of the property. There was even a

After our tasting, we walked the beautiful grounds for a little longer, and we even got to see the Carriage House, a structure housing some amazing cars. You see, Gil Nickel was not only a vintner, but a avid car collector and race car driver! For Michael, who is also a car collector, this was quite the bonus!

I would highly recommend this tasting if you are looking for something on the more formal side....and if you like to take pictures!! Speaking of, be sure to check out the additional pics in our Napa photo album; you’ll see we went a little picture crazy (and they still don’t do the property justice)!

Far Niente is an eco-friendly winery, and they take great pride in that. They recycle extensively, and just like Nickel & Nickel, they are solar powered, producing more energy annually than they consume!  Additionally, all of their vineyards are organically farmed. They are open 10 AM-3 PM daily to the public, by appointment only, so call ahead.        By the way, be sure to check out their pairing and recipe page- it's great!

Oh, and remember the Martin Stelling Vineyard that we mentioned earlier? Take a look at this short video about this wonderful vineyard; it is

But, on to the wine! We met with our wine hostess, Katherine, and were joined by another couple who were there for the tour. As we started walking, she gave us the history of Far Niente (which means “without a care,” in Italian, which I can totally dig). Gil Nickel bought the property back in 1979 and set forth a three-year-long restoration. During the process, he found “Far Niente” carved in stone on the front of the building, where it remains to this day, and thus named the property and winery forever.  The property had been abandoned 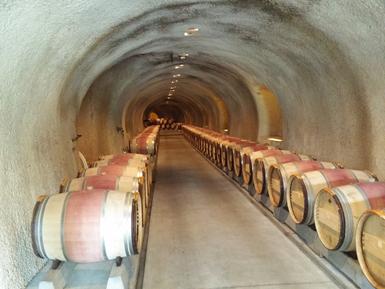 driveway. Along this drive, you'll pass Far Niente’s largest vineyard- the infamous Martin Stelling Vineyard, which is named after the previous owner of the land. More on this vineyard later.

As we drove up to and entered the property, we were quite overwhelmed at what we were seeing; expansive land, ridiculously large trees, strategically planted gardens, fountains, bridges, stone buildings, ....oh my, it was breathtaking (as you can see from

Among these caves, was the Dolce wine cave, and when we got there, we were given a little background on this additional label. Dolce is a late harvest wine that only produces about 2,000 cases a year; very limited production as the harvesting is very difficult, due to wasps. Wasps are attracted to the overly sweet grapes and can cause significant damage to the grapes, mainly by exposing them to spoilage bacteria that they may carry from cluster to cluster; they can

sign welcoming us by name, which made us feel special!

During our tour of the grounds, we got to see some of the harvest activity (OMG I love that we went during Harvest!!!). Then, we started going through their wine caves, which when the excavation began in 1980, were the first modern

destroy a whole vineyard! Who knew?? Another interesting tidbit, Far Niente is probably one of the only wineries that ages their late harvest wine for two years in 100% French Oak Barrels.

The quality is incredible, and it's one of the best late harvest wines I’ve ever had! 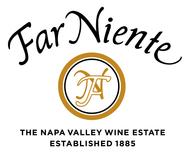 After visiting their sister company, Nickel & Nickel, on our last trip to Napa, we knew Far Niente was on our short-list of MUST VISITs!  The gorgeous grounds (understatement) that the winery sits on is reason enough- 13 acres of landscaped gardens!  The wine is almost just a bonus!

wine caves built in North America. They have since expanded these caves over the years and they now span 40,000 square feet, housing approximately 2,500 French oak barrels!  Can I just say that we can never get enough of touring wine caves?! Incidentally, if you haven't already learned the hard way, always bring a jacket if you are going into a wine cave- brrr!

during prohibition, around 1919, so to look at it now, wow….. you can really appreciate his efforts! And to find out that he had a history in botany, (he helped to run the family’s Greenleaf Nursery in Oklahoma), explained a lot of what we were seeing. In fact, the property is now on the National Register of Historical Places. It’s really that spectacular.

The first crush was in 1982, producing both Cabernet and Chardonnay varietals, which are the only two varietals Far Niente produces. Which leads us to their other labels, Nickel & Nickel (which we HIGHLY recommend to visit), En Route (Pinot and Chardonnay), Dolce (late harvest Chardonnay), and Bella Union (Cabernet). What we’ve kinda gathered from our travels is that adding labels is a way of expressing artistic desires, without convoluting the original label. Keeping Far Niente as purely Napa Cab and Chardonnay is important to them, but there is also the desire to create new wines from different varietals and vineyards, thus your Nickel & Nickel and En Routes are formed. Necessity is the mother of invention! Or something like that.

When you are going to the winery, there is a turn off that leads to a very long

We then arrived at another cave, where a tasting had been set up for us, complimented by cheese, dried fruit, and bread sticks. The set up was very well done, which did not surprise us since they are related to Nickel & Nickel. Have I mentioned how much we loved Nickel & Nickel? LOL

The wines were exquisite and we thoroughly enjoyed them paired with the cheese plate assortment. 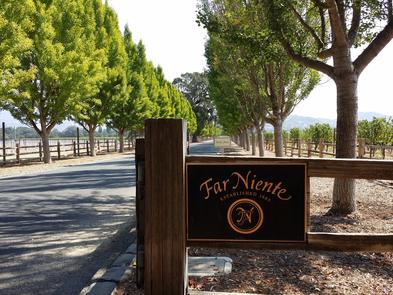