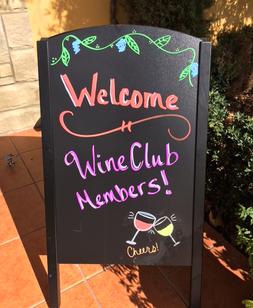 After visiting with Alvin, we started checking out the food. They had the best meatballs, but they were going FAST! Those poor waiters were being stalked by us party goers.

Daniel is super awesome and always takes care of us when we come in.

We got to chat with Chad Melville, the winemaker, for a bit, and we plan on interviewing him in the near future. Such a nice guy! He also does their Instagram feeds, so be sure to check it out. We’ll have more on him in a future Feature Spotlight.  We'll also be doing an upcoming blog to tell you a little more about Melville's tasting room. 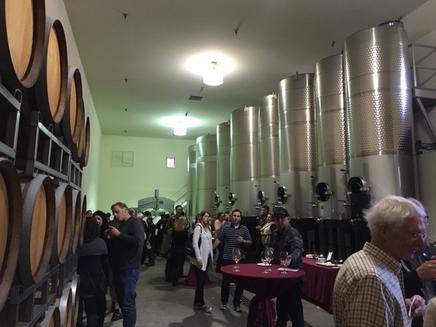 They also had a big spread of cheese and crackers and other small bites, including a dessert table. But come on….we were there for the wine!

After a little food, we moseyed into the wine cave where they were pouring the Library wines…..2008 Estate Chardonnay and 2008 Block M Pinot. Oh my. Um, we may have revisited those tastings more than a

Later, we visited Daniel, (he’s a LA Kings fan, which gets brownie points from us!) who was pouring the 2013 Viognier and 2013 Estate Pinot Santa Rita Hills. He might have had more than that originally, but the party was beginning to wind down and empty wine bottles were starting to accumulate.

The most recent party was fantastic as usual. We started in the back area where they were pouring the current releases. We went straight to Alvin who was pouring the 2014 Block M Pinot, 2014 Estate Pinot Terraces, and 2013 Estate Chardonnay. I don’t know how long Alvin has been with Melville, but I know it’s been a long time, and he's great! That’s one thing I’ve noticed- Melville has very little turnover in their tasting room. That’s a good sign that they are not only passionate about the wine, but that the employees are treated well by the Melville family.

Melville is a beautiful winery off of Hwy 246 in Lompoc, CA., and I have been going there for wine tasting for literally over a decade now. Every person I have ever brought there has fallen in love with it too; including Michael! He’s now a "Monopole" member, which is the top tier of their wine club, with a hefty allocation of 12 wines, three times a year. In addition to having outstanding wines, they know how to throw a party! They have a pick up party for each allocation for their Monopole members, which focuses on the wines included in the shipment, some extra “library wines” that are always a treat, as well as some tasty hors d’oeuvres circling around.