Some of Chad’s favorite foods to pair with Melville wines:

half and half; a beautiful storage facility. 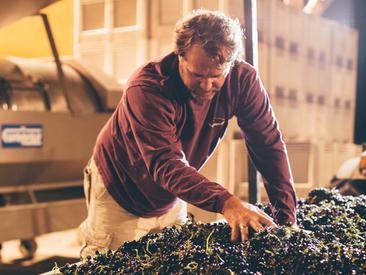 We also got to see the shipping area, which was pretty big! Not sure why, but I tend to assume Melville’s members are all from California, which is so not the case. In fact, Chad discussed how he feels bad knowing that his out of state wine club members can’t frequent the events that they throw at the Lompoc winery.  Taking that into consideration, and wanting to take care of their east coast wine club members, when he’s visiting places such as New York, he’ll rent out a wine bar and throw a tasting party for the members in that area! It’s these nice touches that really

Of course we had to ask Chad our staple question- what does he drink on a Tuesday night?

Beer! Blondes in particular. Kind of surprising, but we get all types of answers to this question. Even more surprising is that he doesn’t drink his own wines as much as one would think.

One thing that we didn't learn about from Chad is that he and his wife, Mary, have a small underground boutique winery/tasting room located in the Los Olivos area! They like people to find out about it organically, so we won't say any more about it here, but one should be able to find it 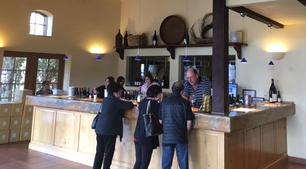 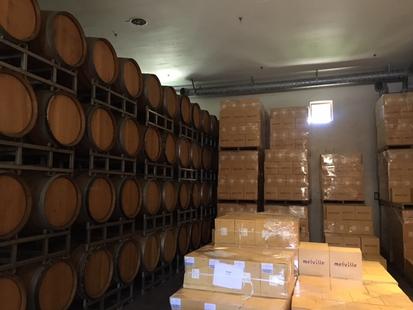 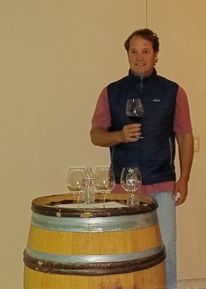 Chad is a super down to earth, very relaxed, outdoorsy kind of guy. He loves what he does and it shows. He also loves to cook, but he never uses a recipe or writes anything down!  In fact, he compared it to how he makes his wine- it’s some science based, of course, just like cooking is, but he would say with both wine and cooking, the ratio is 80% intuitive and 20% science.  Each dish is a new experience, and each vintage is a clean slate; let your ingredients guide you.

Melville has a very cool business model. They are keeping costs down through controlling their own vines, so they can bring you the best possible quality wine and offer it at a price that is attractive.  They also have some higher end wines, but overall, they won’t break the bank. As Chad says, you have to ask yourself, “Do you like your wine and does it fit your price point?”  I’d say Melville definitely

We’ve done some pretty cool stuff as Wine Problems has evolved over the past eight months, but one of my absolute favorite things has been interviewing winemakers- they are just so cool to talk to!  Chad Melville was definitely no exception. We’ve talked to him briefly at a few Melville wine club member events, but this was way cool; three hours of wine talk that just flew by!

farming. When he did in fact start in the family business in 1997, he started in the cellar and worked his butt off to get to the top!  One has to admire his work ethic, and his passion is very apparent. He wants people to know the extra steps and effort taken to make Melville wines, and a lot of times that's challenging to do. Especially when only a short amount of time is usually given from distributors to make a sales pitch. When he does get the time to explain Melville's winemaking practices and techniques, buyers often find Melville's price point hard to believe!

ready to harvest at the perfect time. 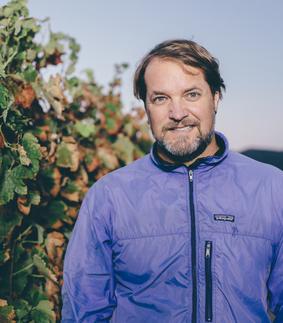 Chad counter that flavor so it’s not overwhelming?  He uses whole clusters to help tone down the BIG California fruit. This means that they need to focus on ripe stems; unripe stems would make the wine bitter and give it too much green vegetable nuances.

Chad travels a lot for work, regardless of the amount of time he tries to be present in the vineyards. Some are sales trips across the US where they carry Melville, while others are more exotic! Recently he went to check out vineyards in both Burgundy and France, which sounds like our type of work trip! He also went to Japan, which you can check out his memoirs in the notebook that he recently started. Lots of cool Melville stuff on there.

What else did I take away from our interview with Chad? Well, that we’ve either really lucked out with the winemakers we’ve interviewed, or that winemakers are all just awesome! But also, that

Chad gave us a wonderful and informative tour of the Melville facility. We started in the rather sterile fermentation room, where he had some wine glasses, and a few bottles of Pinot ready to open. We got to try the 2014 Block M; the 2014 Terraces; 2013 Indigène; and a very special treat, 2007 Carrie’s! Then he took us out to the barrel room, which was quite interesting because he showed us how the different clones were stored. Some whole cluster, some stemless, some

I should start by saying that Chad considers himself a wine grower, not a winemaker, and now I completely understand why. Chad is in their vineyards nearly every day keeping a close eye on what’s going on; in fact, one might say that he has a very intimate relationship with them. He could recite to you how each vineyard had been affected by the elements in any particular year, and what will most likely happen in the current growing cycle.  He's always on top of things with regard to the vines, soils, and climate- patiently watching and waiting, knowing he needs to be

with a little digging around.

There is quite an art to GROWING the grapes.

I mean, if you think about it, if you have perfect grapes, the winemaking part should be somewhat smooth, right? Well, even I know that’s not true. Winemaking is difficult, and mainly it’s because of Mother Nature throwing her curve balls every vintage. But, everything starts with the fruit, so the growing part should never be underestimated in importance. 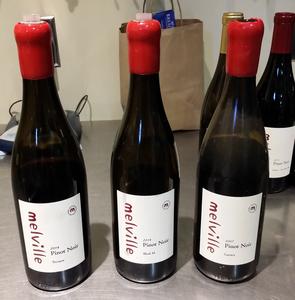 taste the fruit. Speaking of the fruit, California is known for their big bold juicy fruits, so how does

When we asked Chad what makes Melville unique, he instantly replied it’s that they are 100% estate owned and they farm all of the land themselves. Not only does that give them complete control over what happens in their vineyards, but it also keeps costs down. You do not see 100% estate owned very often; most wineries and winemakers purchase their grapes from farmers or other wineries. Also, once a month, Chad takes the whole staff out to the vineyards and to the cellars, so they can be educated on what’s currently going on with the winery (I love this!)...and it really shows in the tasting room; the staff there is incredible.

come through with Melville’s customer service.

Chad only uses neutral wood barrels, which are approximately 15 years old. This is so the barrels can breathe, and the wine doesn't get the extra influences of oak added to the aroma, flavor, and/or texture. Again, with good fruit, you want to 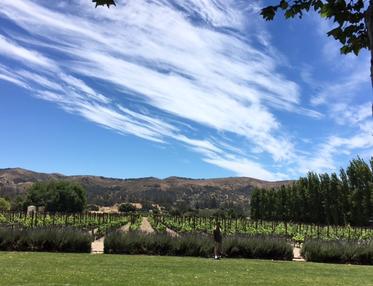 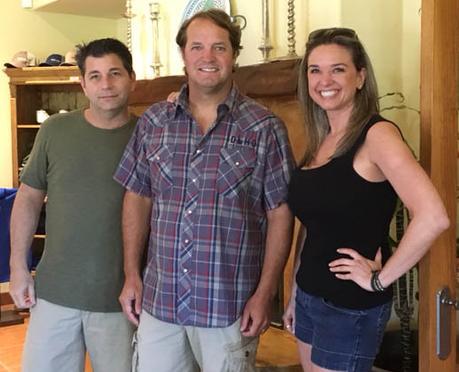 Although Melville was originally founded in 1989, by Chad's father, Ron,  Chad didn’t automatically go working for the family business. He studied business at USC and after graduating, traveled the world, including a lengthy stint in Zimbabwe as a chef! He then settled down with a job as a stock broker on the Pacific Exchange.  Albeit his success, he was still drawn to the food and wine business, and eventually returned to his passion,

fits both of those criteria quite perfectly.