Since we knew we could get many of the wines at local stores at home (Petite Petit, Freakshow, 6th Sense…) we opted to buy a few we haven’t seen around. We bought their 2014 Chardonnay and 2014 Incognito White, which until our visit, I wasn't even aware that they made whites. Funny story about the Incognito; the wine was originally called "Chicken Duck" and was labeled as a Roussanne. After their first distribution, they came to find out the grapes they were using were actually Viognier grapes, not Roussanne! So they made it into a blend, renamed it, and thus Incognito was born. It’s a blend of five different grapes, Viognier, Chardonnay, Sauvignon Blanc, Symphony, and of course, Roussanne. It’s truly a beautiful white wine. We also bought their 2013 Rapture, a Cab Sav that is only produced on exceptional vintage years and aged in 100% French oak barrels. This wine in particular, won me over. We ended up sharing it with some good friends later on in the trip, and they equally enjoyed it.

I have taken Inkblot to dinner parties on several occasions and it’s always a hit, not only because of the unusual label, but the Cab Franc is a crowd pleaser. In my opinion, Cab Franc is one of the best values out there, since they don’t tend to be as popular as the Pinots and Cab Savs. 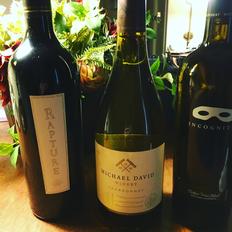 Our first stop on our Wine Problems 2015 California Wine Tour was Michael David Winery in Lodi. I’ve been a big fan of Michael David for many years now, and although most would say their MDW gateway wine was their well-known 7 Deadly Zins, that isn't the case for me.  I discovered them while browsing through the aisles at LA Wine Co, and admittedly was swayed to a purchase because of their very cool wine labels. Their Inkblot Cab Franc, and their Earthquake Petite Sirah, were the first MDW wines that caught my eye. I didn’t even realize they were from the same winery at the time. Both of those were excellent! Then, a little later in time, their Freakshow Cab and Petite Petit were recommended to us, and we really enjoyed those too!  Thus, being a fan of so many of their wines, we decided to take a slight detour to Lodi, on our way to Napa.

The MDW tasting room is big and attached to a small café and grocery store with locally grown products. They offered two different tastings: classic, and limited production/reserve wines. We opted for one of each so we could get the full experience.

After we wrapped up our tasting, we took some advice from our wine guy, Jacob, on where to go next. He emphatically recommended Mettler who just so happens to have….wait for it….. the same winemaker as MDW, Adam Mettler! He also gave us some advice on where to eat for dinner later. I prefer asking the locals where to eat; you can get some great recommendations this way. And off to Mettler we went…….

The staff was really nice and very knowledgeable. We learned that Michael David is two separate people; brothers in fact, who are 6th generation grape growers... and they make a lot of wine!