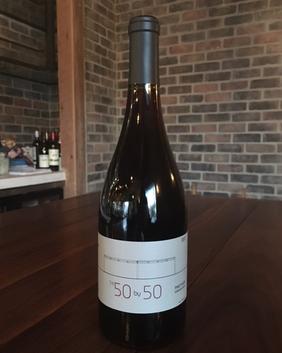 Now granted, this was only our second BvB, but we're starting to notice some consistency... and that consistency is the inconsistency! What I mean by that is, both times that we have done this, we have seen a lot of "flip-flopping." Meaning not a single judge (and this time we had five) preferred the taste of the same wine for all three of the rounds. We also experienced this in our first competition between the two Cab contenders. Not only that, but once again Michael and Nicole each picked opposite of one another. Michael scored the bout 7-3 in favor of the ROAR, while Nicole scored the bout 7-3 in favor of the Cherry Pie. So how did the others vote? Well, John favored the Cherry Pie with his tally being 6-4; and Gerald favored the ROAR with a final tally of 6-4. Yup, so we had yet another tie, with Krista left to decide the winner, and that winner is.....

ROAR!  That's right, Krista scored the bout 7-3 in favor of the ROAR, thus breaking the tie!

As I stated prior, everyone did some flip-flopping- Ironically, while Michael, Gerald, and Krista all ultimately picked the ROAR, all three of them preferred the taste of the Cherry Pie prior to decanting it. Nicole also did, and in fact, preferred the taste of Cherry Pie the whole way through, that is up until the pairing. John, on the other hand, was the only one who initially preferred the ROAR, but it was Cherry Pie the rest of the way for him. Incidentally, our food pairings included the Chicken Pot Pie; Turkey Panini; and Braised Short Rib plate.

But wait- there's more! We thought we'd go one step further and bring in a second guest judge...hell, why not a third while we were at it?!

Enter Mr. Gerald Casale and his lovely wife, Krista. Gerald's name may or

That's right, Gerald is from the iconic, rock band, DEVO, and he also happens to have his own wine, "The 50 by 50." Gerald launched his brand in 2014, and at the moment his varietals are only Pinot Noir and Rosé of Pinot Noir, both from the Sonoma Coast.

Both of these Pinots are winners in our book, and let's face it, a score of 91 from Robert Parker isn't too shabby! Neither one of these Pinots will disappoint, although admittedly, it might be a little easier to track down the Cherry Pie. Wine Problems would like to thank Gerald and Krista for being guest judges, as well as John Fanaris and the great staff at Rustic Kitchen, 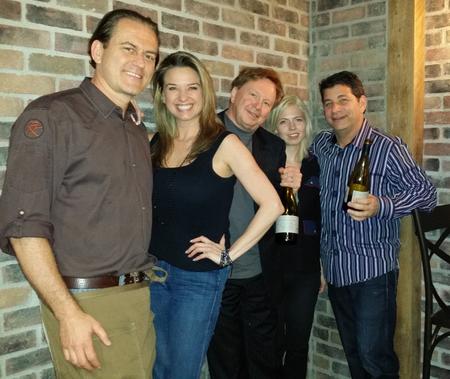 Between the five judges, and the three Pinots, we went through a lot of glasses!

So as you can see, once again, it was another very close battle coming down to the wire. And also once again, when you get right down to it, the REAL winner was US! We were able to enjoy two great bottles of Pinot, with a Rock & Roll legend and super great guy! As if that wasn't awesome enough, Gerald brought a couple of bottles of his The 50 by 50 Pinots for all of us to enjoy during the one hour decanting time, and they were excellent!

Did you get it? Well, if the "Energy Dome" by itself didn't immediately give it away, perhaps

Gerald actually taught wine courses for a while, and says that he is a "Pinot Noir junkie," so his participation in this round of BvB was a no-brainer! His wine journey is actually quite interesting, and you can read more about it in Wine Problems' Monthly Spotlight on Gerald and his wine.

a photo of him wearing it will lock it down for you?

On to the details! For our bottle, we opted to go with what we we consider to be a great and relatively mid-priced ($44.99) Pinot, CHERRY PIE. The vintage was 2012 and it is from the Stanly Ranch Vineyard, which is located in the Los Carneros region of Napa Valley. Robert Parker gave this a score of 91. The only parameters that we gave John was that his bottle of Pinot needed to be in a comparable price range, and from the same 2012 vintage. John opted to bring a bottle of 2012 ROAR, which is from the Santa Lucia Highlands, and it sells for around $42.00. Coincidentally, Robert Parker gave this a score of, you guessed it, 91. This was going to be good! 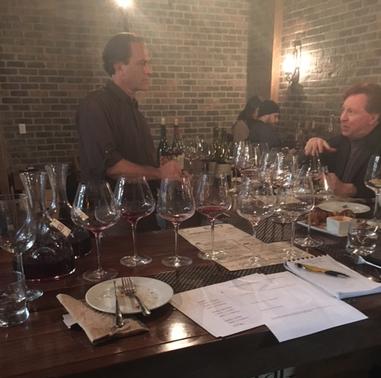 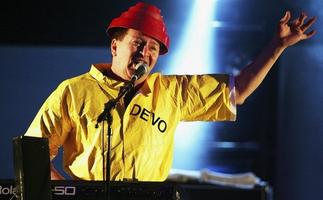 The time has come for a second round of Bottle vs. Bottle, and given that the first one went so well, we were excited to get another bottle-battle lined up! We learned some things the first time around, so we made a couple of small modifications to the rules; namely we are no longer judging the color beyond the first phase of the competition.

When we did our first BvB a couple of months ago, we took two Cabs that we really loved and put them head-to-head. For this second edition, we decided to put two Pinots up against one another, only this time, we only chose one of the contenders. The "challenger" was picked out by John Fanaris. John is the owner of Rustic Kitchen, where we held the event; he is also an avid wine collector and level 1 sommelier, and was our guest judge in our inaugural BvB competition. He was such a great addition and gracious host, that we felt we should bring him back for Round 2.

We thought that it would be fun to take two wines that we really love, and put them up against each other in a blind tasting. To be fair, the wines must be of the same varietal; in the same price range; served at the same temperature; and in the same type of glass. Our "competitors" will usually be from different wineries, but occasionally they might be the exact same wine, just different vintages. They could even be the same brand and vintage, but from different vineyards.  Make sure to follow us on either Instagram, Facebook, and/or Twitter to stay posted on when our next match up will be!

may not ring a bell to you, so here's a hint: