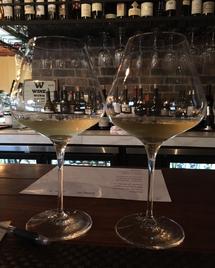 Now it was time to let the wines decant for an hour, in preparation for the next two rounds. Which also meant it was time to pick out our food pairings! Among the food that we ordered was: Vietnamese Pork Lettuce Wraps; Grilled Peach and Burrata Salad; Kung-Pao Brussels Sprouts; Grilled Corn Queso Fresco; Teriyaki Chicken Sandwich; and Pan Roasted Wild Caught Salmon.

Finally, it was time to taste the wine, and what do you know? Another unanimous decision, with all four judges choosing "Wine B"- wow, this was getting interesting!

There was definitely a difference in color between the two, and all four judges ended up choosing "Wine B" as their preference (it is important to note that none of the judges ever know what the others have picked until after all votes are in).

I believe that this was the very first time in all of the BvBs, that a decision, in any individual round, had been unanimous! Then it was time to judge the aroma (aka "the nose"); this time it was "Wine A" that had a unanimous decision!

Once the Chards had their hour decanting, it was time for Round 2. We only judge the color in the first round, so we started with the nose. Here it was a split decision, with Michael & Jim sticking with their round 1 pick of "Wine A," while Nicole and John switched over and went with "Wine B." Would there be any voting changes for the taste, after the decant? Nope! All four judges were once again all in agreement that "Wine B" was still their taste preference.

When it came time to decide which wine paired best with the food, the voting was split again in this final round. Michael and John chose "Wine A," while Nicole and Jim went with "Wine B."
And so all the points were tallied, and once again, a unanimous decision determining the winner, and that winner is..... 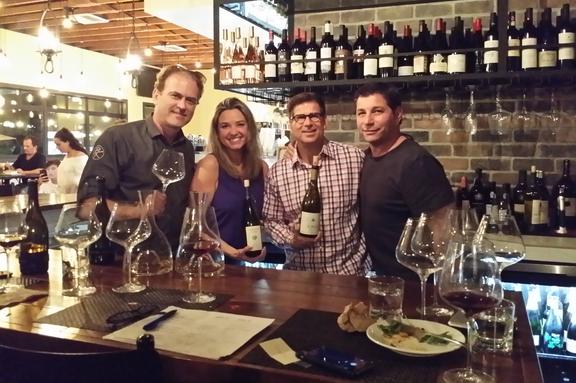 Once again, we headed off to what has now become our regular venue for Bottle vs Bottle, Rustic Kitchen. It really is the perfect place to host the event at- both the food and atmosphere are fantastic! As soon as the wines were secretly placed into the decanters, they were immediately poured for us.

which means, as usual, the REAL winner was us!

Wine Problems would like to thank Jim Fox for being a guest judge, John & Noelle Fanaris for being great hosts, and the great staff at Rustic Kitchen.

AUTEUR!  Yes sir, the champ retains its title! And you can bet that the next time we're in Sonoma, Auteur will be A MUST to stop by! Now, don't let the unanimous decision sway you from purchasing either of these fine Chardonnays. They are both great or else they wouldn't be in BvB,

If you've been following Bottle vs. Bottle since the beginning, then you've probably come to observe at least these three things:
1.) We don't play favorites.
2.) They're unpredictable.
3 ) They're a lot of fun!
And so, needless to say, given that six weeks had passed since our last competition, we were chomping at the bit to do another.

When we had BvB 3, the first of our Chardonnay bouts, we had just returned from Paso Robles and we were so impressed with Adelaida's HMR Chardonnay, that we knew we had to put it into BvB. We asked our friend, and level one Sommelier, John Fanaris, to come up with a comparable challenger and he introduced us to Auteur. Of course we were confident that our contender would prevail, but alas, it did not (albeit, it was extremely close).

We had predetermined that the winner of BvB 3 would go on to face another Chardonnay that we love, Cakebread, hence the matchup for BvB 4 was already lined up the minute BvB 3 concluded. So here we are... Bottle vs. Bottle 4: Auteur vs. Cakebread....and of course, once again, we were confident in our contender. Now given that this edition featured Chardonnay, and we just so happen to know a celebrity vintner who loves this varietal, we reached out to him to see if he would grace us with his participation as a guest judge?

Enter Jim Fox, the color commentator for (and former player on) the LA Kings hockey team. Jim is also co-owner of Patiné, which is hands down one of our favorite Pinots, so he knows a little bit about wine. And so it began....