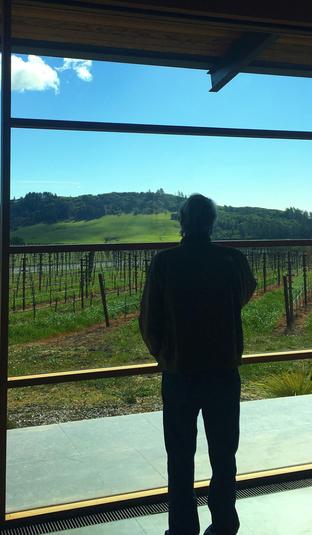 Notably on Steve’s team, is team leader Ruben Molinar, who is Mia’s father, and which explains her vast knowledge of the vineyards! Steve met Ruben in 1990, and they have been working closely together ever since. Ruben assisted Steve in the planting of Occidental's vineyards on the Bodega Headlands, and faces the challenge of farming Occidental’s extreme coastal sites with great care.

We were getting ready to wrap up with Steve and tour the winery with Mia, but before we did, we needed to ask some of our hard hitting Wine Problems mandatory questions!! First, curious as to whether Steve had any hobbies?  One that he mentioned was snow skiing, as he skied competitively in college. And of course we couldn't let Steve go without asking him the one question that we like to ask all of the winemakers that we have interviewed- What do you drink on Tuesday nights?

His answer? Mostly beer and sometimes Burgundy. Hmmm.... beer seems to be a fairly common answer among winemakers, and we guess the latter really isn't too shocking, given his style of winemaking! A new question we’ve added to our hard hitting question list is: Screw caps- yay, or

The first was a revisit of the 2016 Freestone-Occidental, so that we could taste how nicely it had opened up, while we were out on our tour. It had really flourished and was drinking beautifully!  Next was the 2015 Bodega Headlands Cuvée Elizabeth, which was fairly complex with bursts of red fruit, and a long finish. Lastly, we tasted the 2015 SWK Vineyard, which was perhaps the most complex of the three; it was very big and concentrated, with a bit of minerality. Sadly (for us) they no longer had any of their fourth Pinot on hand, their 2015 Occidental Station Cuvée Catherine, which we hear is amazing!

Mia walked us through each wine discussing the various parts of the vineyards harvested for each one. The girl knows her stuff!!! It still amazes me how much slope and sea breezes can affect the grapes! Each wine was distinctive, but had the same bright acidity that you know demonstrates how the wines are made to drink, but crafted to age. That’s Steve Kistler for ya! Such a lovely tasting and experience; we were so happy we got a chance to check out the new winery. You should too!! But, you need to be on their mailing list and it’s by appointment only.  #trustus

A very special thank you to Steve, for both his time and graciousness. It was truly an honor to 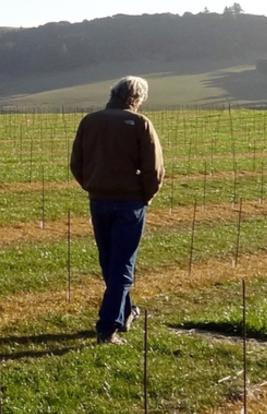 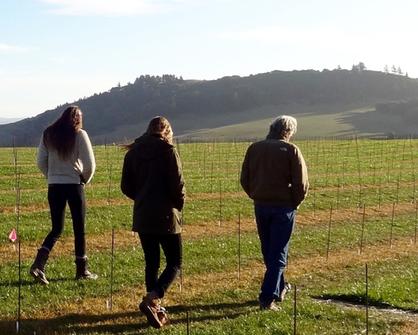 He plans on keeping production small, and he currently only makes four pinots.  Steve had really wanted to get back to his roots (ie. smaller production), as Kistler’s production had gotten SO big!  Needless to say he's totally good with the four wines, at least for now, and looking forward to keeping things simple with low production and high quality. He’s also looking forward to working with his two daughters, Catherine and Elizabeth, both of who have Occidental Cuvées named after them. They have joined the Occidental team, now that they have graduated from college and have returned home, and will assist in the business and the winemaking.

Speaking of the team, it should be noted that Steve has had the same vineyard staff for nearly 30 years now; including multiple generations of families. You don’t hear that too often, as most vineyard jobs are seasonal and it's not unusual for workers to jump from winery to winery.

fans of his Kistler wines, and we were really curious about what he was up to now, so we thought

this would be the perfect opportunity to make Steve and Occidental our new Wine Problems Featured Spotlight! We are both grateful and honored that he accepted our proposal to meet

nay? He was a nay. So don’t expect to see screw caps on any Occidental Wines any time soon.

Steve Kistler left Kistler and is focusing on his own separate venture, Occidental. I'm sorry... wait....WHAT?!?!

At least that was MY reaction upon hearing the news of Steve’s departure from the incredibly successful winery that he started back in the late 70s. The departure wasn’t as abrupt as we may have originally thought, but it really piqued our curiosity. We hadn't yet tasted, or were even very familiar with, Occidental, and we didn’t know a whole lot about Steve. But we are big

meet a wine legend of his caliber.

His new winery, Occidental, is up a good sized hill, which is a bit of a trek off of the highway. Driving up, we could feel our anticipation grow, as we had REALLY been looking forward to meeting Steve! After parking, we were greeted outside by Steve, and Mia Molinar, who works in production and hospitality (more on her later). The outside of the winery is gorgeous!!

Lots of wood, glass, and concrete, with a lot of greenery; so picturesque. Walking into the winery was more wood, and a very spacious and airy floorplan.  We were seated in the foyer with Steve, and chatted with him over a glass of the 2016 Freestone-Occidental Pinot, which was well-balanced and delicious!

We started by asking Steve if it was indeed okay to talk about Kistler, as we really didn’t know if maybe this was a sore subject for him? But not at all! He seemed very.... content. He said that the departure was many years in the making, as both sides came to terms of what his future would be. It seemed like 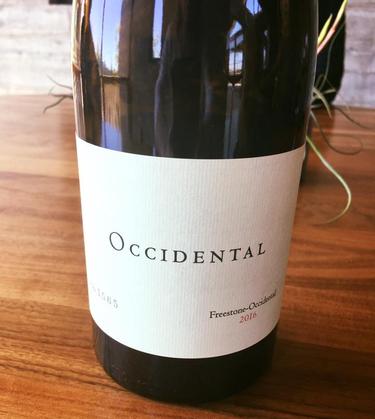 From the tasting room, we started on a small hike down the hill, through the vineyards, to the winemaking facility. Everything was pristine and state-of-the-art! He completely thought things through, and designed most of the facility himself. This set-up would be any winemaker’s dream! After a thorough tour around the winery, including the crush pad, barrel room, and fermentation

The vineyards overlook the Pacific Ocean, and the Freestone-Occidental area has some of the coldest and latest ripening sites, where Pinot is grown in western Sonoma. He is so grateful for the vineyards he was able to purchase and is making some outrageously good Pinot Noirs! This really shouldn't be a surprise to anyone who has had his Pinots under the Kistler name. We were curious as to if there is a plan for Occidental to make any Chardonnay in the future? But all we got out of him was a shrug and a smile, and a “no, not at this time.”  Guess we'll all have to wait and see!!!

him at his new place of business. 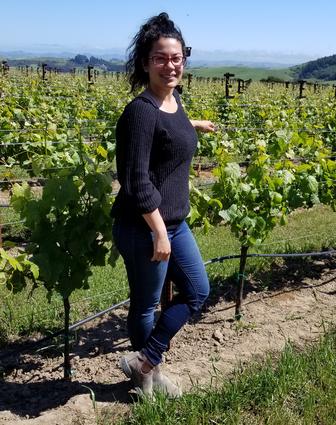 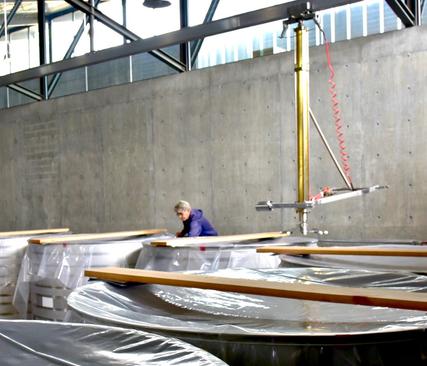 The tasting room, which had just opened a few weeks prior, is rather large and airy, with a gigantic fireplace and floor-to-ceiling glass windows. It’s like drinking wine in the midst of the vineyards. The views are breathtaking up on that hill! A more formal wine tasting, we sat at a large wooden table in the middle of the room with three Pinots before us.

For those of you who may not be familiar with Steve or Kistler, he studied Enology at UC Davis and Fresno State University, and was also an assistant at Ridge Vineyards for a couple of years. Then, in 1978, he started Kistler Vineyards with Mark Bixler, who he had met during his time at Fresno State. It was a great partnership- Mark primarily managed most of the business affairs, and oversaw the sales and marketing. This allowed Steve to be able to focus on the winemaking and the vineyards, which is where he feels most at home. Sadly, Mark unexpectedly passed away in

Steve was the winemaker for most of Kistler's vintages, which are Pinot Noirs and Chardonnays....and not just any Chardonnay; we're talking ones that set both the bar, and the standard, for how most Chardonnays are made in California. Kistler's Pinots receive just as high of accolades, albeit perhaps they are a little more under the radar, since they make far less of them.  So yes, you could say that we were very excited to check out the new place! 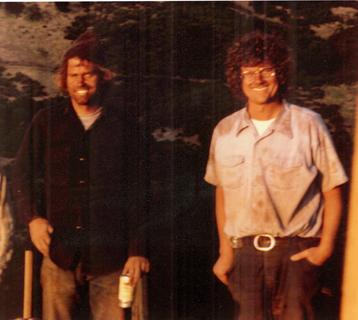 it was an amicable separation, but I would imagine it’s still a little bittersweet. The Occidental property is actually not new to Steve at all, in fact he purchased a portion of it around twenty years ago and started planting Pinot Noir there shortly thereafter. This was followed by his purchase of the adjacent property a few years later, and more planting, bringing the total acreage to 350, 85 of which is comprised of Pinot Noir vineyards! Now with solely Occidental to focus on, Steve is in full-swing, bringing Old World winemaking principals to cool climate, coastal Pinot Noirs, off of the Occidental Ridge!

rooms, it was time to head back to the tasting room and try some more wine! Yay!

Once we wrapped up with Steve, Mia took us on a tour of the vineyards and winery. Mia joined the Occidental team in February. A graduate from UC Davis with a degree in Viticulture and Enology, she previously worked at Hanzell Vineyards in Sonoma for three years, and even did a harvest in Australia. She was absolutely incredible with her knowledge of wine, the vineyards, and the winemaking facility. In fact, Steve pretty much gave her carte blanche in creating the tasting room experience, and she also helps in the cellar. She wears quite a few different hats at Occidental, and we could totally see why Steve trusts and relies on her so much.