So, what else can we tell you that we learned about this winemaker from France? You know we love to ask those hard-hitting questions!

We asked him about hobbies, and he said he works all day, and is up at 3am to answer emails, so his favorite pastime? Playing with his kids! Can we have a collective AWWWW right now? But, if he does find spare time (and we're not sure how? lol), he likes hiking, sailing and snowboarding.

What does he drink on Tuesday nights? He admits he likes to drink his own wines. Can’t blame him there!  A glass of Rosé or white wine is a go-to.

What does he like to pair with his wines? BBQ!

We asked him his thoughts on screw caps; more specifically, Yes or No? - it’s a no, he’s a traditionalist.

He’s a pro at driving a Mule; I’m living proof of that!


Why You Should Visit?

There are so many wineries in Paso Robles that we could (and do!) recommend, and Clos Solène is definitely one of them. It’s a beautiful place to visit- a lovely indoor tasting room with an adjacent outdoor seating area; and talk about a view! The wines are unique and the people are great! In fact, if you happen to see Roxanne, Solene, and/or of course, Guillaume, please tell them we say hi! Clos Solène is France meets Paso, which in itself is intriguing. You’ll still find that Paso fruit, but it’s the finesse of Guillaume’s winemaking skills that makes the wines so different. It’s the perfect addition to your Paso Trip itinerary (which should now also have Benom and Al Lago on it). #trustus

The Story Of Clos Solène 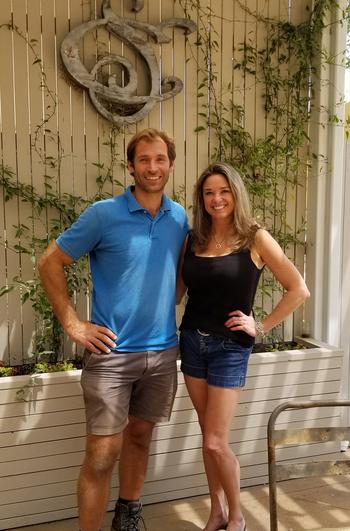 only thing in his life that he was missing, he mailed a letter to Solène in Spain, convincing her to move to Paso to be with him. She agreed, and they happily reunited.  Clos Solène was born shortly after that in 2007, aptly named after his other love, (in addition to winemaking), who is now his wife, mother to their three children, and co-owner of this beautiful winery.

At first, Guillaume started doing private tastings in his home, but in 2013, Clos Solène began pouring their wines out of the then, newly opened, “Paso Underground,” in downtown Paso Robles.  This is now a well-known tasting room, located in the back of a clothing store, “Speakeasy” style, and has been a starting point for many highly acclaimed Paso Robles wineries. Shortly after that, local (and not so local) winemakers started to move into a local industrial area, known as Tin City. Side note: If you haven’t been to Tin City, you absolutely must go!

As wine production was growing for Clos Solène, they decided to follow suit, and opened their own Tin City tasting room in 2014. That went really well for a while, but as much as they loved Tin City, an estate winery, with full production on-site, was always the goal for Guillaume and Solène. So, when the opportunity arose for them to purchase the 28-acre property in the Willow Creek AVA, they knew they had to take a leap of faith.

Located off of Niderer Road, the winery is on 28 acres of land. In January of 2017, when the Fabres acquired the property, it had belonged to Pipestone Vineyards, and had about eight acres of vines planted; some upwards of twenty years in age. By July of 2018, when we first met with Guillaume, he had already re-grafted the entire eight acres and was well on his way to

We here at Wine Problems have been so fortunate to not only meet some of the most incredible people in the wine industry, but to also spend real quality time with them, and getting to know their story. This is something so special, and we never take it for granted! Case in point, on a gorgeous Sunday in Paso Robles, we were lucky enough to meet with winemaker extraordinaire,

A brief history: co-owners Guillaume and Solène Fabre are both France natives, who met and fell in love, not so coincidently, in France! Unfortunately, the timing of their meeting was not exactly perfect, as both felt they needed to follow their individual passions, and so they parted ways. Guillaume, knowing the risk of leaving his family and emerging on an unknown adventure, moved to Paso Robles to follow his dream of becoming a winemaker. Solène, driven by her own ambition, moved to Spain to further her studies. As mentioned above, Guillaume moved to California to take a harvest internship at L’Aventure.  During his tenure at L’Aventure, he quickly made a name for himself as an assistant winemaker, and soon he was ready to branch out on his own. Realizing the only 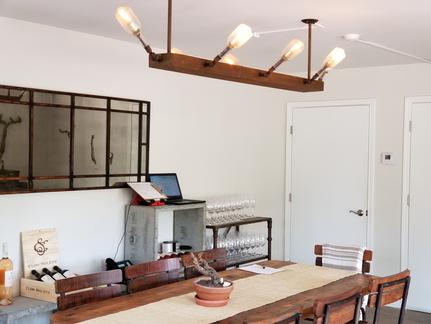 While we're on the topics of Tin City and being busy, there is also a tasting room there called

Al Lago, which also has some fantastic wines... and guess who happens to be the Winemaker and Vineyard Manager there?  If you guessed Guillaume, you would be right! When does this guy have time to eat and sleep?! 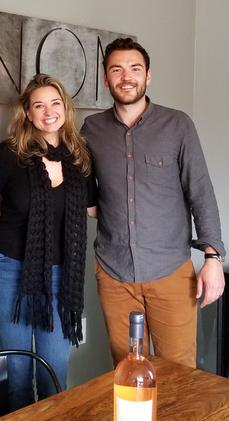 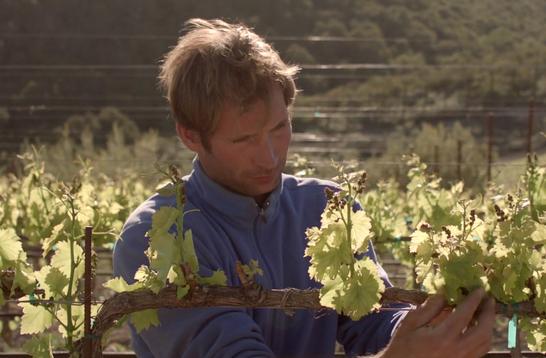 We arrived at the winery at 10am with croissants and fruit in tow, as we don't like to go anywhere empty handed 😊. We were met by a cheerful and enthusiastic, Guillaume, who sincerely seemed excited to show us his property, and we can see why! Many of the previous owner’s facilities required updating, so it took Guillaume five full months to clean up the property from its purchased state, to get it in proper working order. There was still much more clearing to be done on the property, but he was very proud of their accomplishments thus far.

and just in case we couldn't see that far, Guillaume took us back out on the mule to show us!

This time, I was ready for the wild ride, which was either due to the fact that I knew what to expect, or his new bigger mule was a bit sturdier. 😉 The progress he has made is incredible and he is still not even quite finished.  After another full adventure around, and to the top of, the property, we safely returned to the barrel room where we were in for a real treat. We got to try a few of his brand new wines, and needless to say, they were all fantastic.  Bravo Guillaume!

Coincidentally though, Guillaume and his brother, Arnaud, started another wine venture, Benom, which is now pouring out of Clos Solène’s old Tin City spot! Benom comes from the French work “binôme,” which means “a project together,” and they started the project because Guillaume wanted to do something different than Clos Solène. It’s very small production, and the wines are incredible! Michael (who had sworn he was done joining wine clubs) joined their wine club after our first visit. What can we say? Guillaume makes great wines!  They’re doing some super cool and exciting things, including a Chardonnay and Sauvignon Blanc blend. Say what?! Yep!  Just don’t tell the folks back in France though. 😊 We always check out what Benom is pouring every time we’re in Tin City, and we make sure to say hi to Arnaud if he’s around. He’s such a great guy, but also super busy, just like his brother!

Guillaume then told us about his future plans and vision for all of this additional acreage. What he had planned on doing sounded incredible, so much so that we couldn't wait to go back and see his progress. In fact, we delayed posting this spotlight an entire year just so we could meet with Guillaume a second time, and see for ourselves.

After our tour of the property was complete, which took a while, (it’s a BIG property!), we headed back to the tasting room to taste some wine. Yes, please! During this time, not only did we get to drink some incredible wine, but we were also able to dig into more of Guillaume’s story.

which varietals should be planted in each.  Then, suddenly, we made a sharp left and started going straight up one of the aforementioned slopes! Going up the hill was okay…but when we started going straight back down it on the other side, this city girl was white knuckling that mule!  Between the noise of the mule, Guillaume’s French accent, and the fear I was so desperately trying to hide, I don’t think I quite grasped every word that was being spoken. Lol. Eventually we arrived at the top of the property and we got out of the mule, so we could catch our breaths and take in the views.

One of the first things I noticed about Guillaume (besides his blue eyes, lol) were his stained and calloused hands, and his suntanned face. There is no doubt this man is in those vineyards every day, tending to his cherished vines. His passion for his trade radiated, and was infectious. He asked if we wanted to take a ride on his “mule” and go check out the property. Admittedly I wasn't quite positive what a “mule” was, but ready for an adventure, we emphatically said YES PLEASE! So, Michael and I jumped into the “mule,” and off we went!

We headed out to the entrance of the property to look at the newly planted trellises. Guillaume would point out which varietals were planted in each block of the vineyard, and explain to us how the different soils, sun exposure, and the sloping of the land determined

Guillaume comes from a long lineage of French winemakers; in fact, he is the sixth generation, and his father started teaching him when Guillaume was very young.  A little bit of Guillaume trivia, did you know that when he first decided to leave France, Paso was not his first choice? Chile was! Unfortunately, (for Chile 😉), his phone calls went unanswered. However, there was a certain person in Paso who did pick up the phone- Stephan Assco, winemaker and owner of a highly successful Paso Robles winery called, L’Aventure. Stephan happened to know one of Guillaume’s father’s friends; they were introduced, and the rest is history!

Guillaume worked at the L’Aventure Winery for a year, when he was offered a full-time position as assistant winemaker. In addition to having the knowledge of winemaking that he learned from his father, he also acquired additional guidance from Stephan, who helped him to understand the terroir of Paso Robles. Guillaume admits his biggest challenge with winemaking is the sun and heat of Paso, but one of the great things about his new property is that not only is it big, but it has lots of different sun and wind variables due to the hillsides.  He seems to know exactly how he wants each varietal planted, and in which area that will make best of Mother Nature’s challenges. 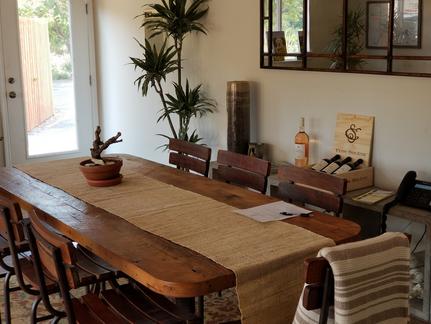 preparing more than double that for planting additional vines, consisting of both Rhone and Bordeaux varietals! 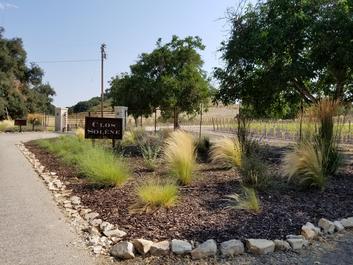 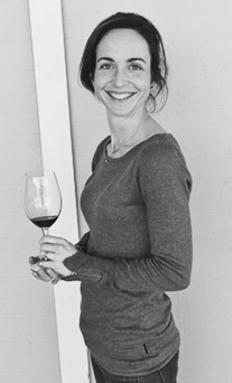 A year had gone by and after a couple of attempts to meet with this busy man, he invited use to come back to the winery and see what he had done. WOW! To say he completed everything he told us about would be an understatement. New blocks of vines had been planted as far as the eye could see,