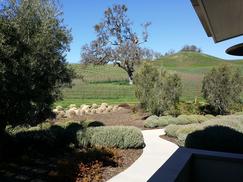 Wine Society members may bring up to three guests. It doesn't require reservations, but it's not a bad idea to make them, in case they get busy. It also requires a gate code, which members receive prior, from the host in the main tasting room. This is a good sized room, complete with a bar and stools, as well as several couches and chairs spread throughout. The wine hosts come to you, and will even provide a cheese pairing for the wines- it’s great! Although their main wine bar is pretty great too and offers outdoor seating with a gorgeous view. 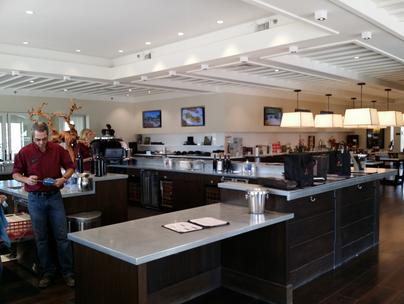 So a little bit of back story on Justin……Michael has been a VIP at Morton’s Steakhouse for years and even has a wine locker there, which means he gets invited to special events that they host. A couple of years ago, they were hosting a special Justin Isosceles tasting with their then relatively new winemaker, Scott Shirley, and we decided to attend. SO glad that we did! We tasted three different past vintages, and Scott walked us through each one, deciphering the different nuances and composition of each. Then, he introduced the latest vintage, 2012, which is the first vintage that Scott oversaw from start to finish. We immediately fell in love with it- it was (and still is) outstanding!

Soon after that, we were invited to a friend’s Super Bowl party in Paso Robles, so we decided to make a wine trip out of it. At the top of our to-do list was visit Justin Winery. I hadn’t been there in years and Michael had never been, so we were both pretty excited. Plus, since the 2012 Isosceles that we had tasted was so great, Michael was determined to pick up a magnum of it.

As I had remembered, Justin is way at the top of the hills in Paso. The grounds looked pretty close to what I recalled, but the inside of the tasting room was COMPLETELY different. I remembered it being a pretty cramped tasting bar, but now it’s a very spacious and bright space, with a rectangular shaped bar in the middle. 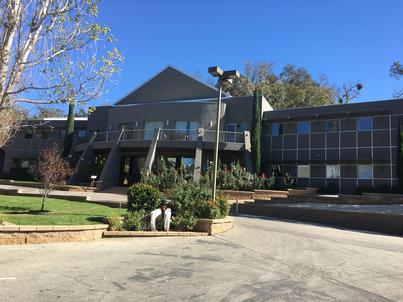 To the right is lots of Justin swag, like golf balls, shirts, coasters, wine holders, olive oils, candles (I LOVE their candles!), and a bunch of other fun wine stuff. A little further past the tasting bar is the Justin Restaurant, which we both love and highly recommend for brunch or dinner.

The new tasting bar, as I previously mentioned, is quite large. We took a spot in the middle where Mark Rodgers, who is the coolest guy ever, poured us our tastings. Michael joined the wine club (aka Justin Wine Society) on the spot, and completed his mission in getting a magnum bottle of the 2012 Isosceles.

Just a side note, we love this place and just about every wine that they offer.  Their less expensive wines, such as their Sauvignon Blanc, are a great bang for your buck. Their Cab Reserve; Syrah blend, Savant; and their flagship, Isosceles, are all reasonably priced and fantastic. Then, there's their upper-end wines: Isosceles Reserve; Eighty-One (Cab); and Focus (Syrah); which all hold their own against some of the best wines we've ever tasted.

So that's the back story on Justin. Since that day, we have returned on multiple occasions. Everyone is so friendly and helpful, and we always look forward to having Mark serve us when we visit. He usually is always working in the main tasting room, but here's another nice perk of being a member of Justin's Wine Society- they also have a private tasting room (aka Wine Society Lounge) on the other side of the hill, exclusively for their members. 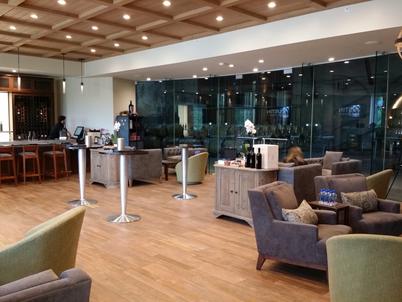 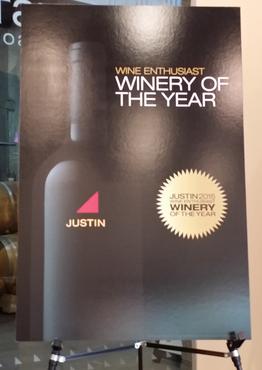 Pretty much any Paso Robles list is going to have Justin on there as a “must see.”  In fact, it was recently named Winery Of The Year, by Wine Enthusiast!  And for good reason; it's beautiful, the wines are fantastic, a great staff, and they offer food.

What we bought:
A six pack of the 2014 Rosé- Perfect spring wine!