wines, blended and unblended, that screams great fruit. We were also curious about the Saxum wine labels, which are very unique; Justin informed us that they are made by a local artist,

due to a friend’s recommendation. When it came time for choosing a special bottle for Michael’s 50th birthday, this was the bottle I chose: Saxum- James Berry Vineyard 2009.  He was more than impressed, (a gross understatement), as was his best friend who rarely ever drinks alcohol, let alone wine. We were both surprised when his friend was asking for seconds!

The renowned and well respected winemaker for Saxum is Justin Smith, who resides in Paso Robles. We thought we’d try reaching out to him, on the off chance he’d be open to granting us an interview. When he said yes, we were both beyond excited and pleasantly surprised! Although after meeting him, we weren't all that surprised anymore…..he is the most down–to-earth guy!! Not that I was necessarily expecting a guy with a huge ego, but considering that he was named Paso Robles Wine Industry Person of the Year in 2013; has scored over 95 points on 38 of his wines (and counting); his 2007 James Berry scored 100 points from Robert Parker and was Wine Spectator's #1 Wine Of The Year, it was no doubt that he has some bragging rights! All that considered, he was so modest and just super cool.

The name Saxum originates from Justin's great grandmother.  Her last name was Stone and she had a tradition of giving out rock-related nicknames to her kids! Justin's father is nicknamed "Pebble" and the other siblings are “Brick,” “Rocky” and “Sandy.”  Justin didn't want to give his own children rock names, and opted to alternatively give those names to his vineyards and wines.

Saxum is Latin for "stone."

He shuffled through these pipes and in what seemed to be without rhyme or reason, grabbed a couple of bottles. He then walked back with them to a small table set in the middle of the cave, where he proceeded to open these bottles of his wine, 2006 Broken Stones and 2006 Booker Syrah. They were ridiculously amazing and paired fantastic with the Trader Joe’s cheese and crackers that we had picked up on the way there (we hate going anywhere empty handed)! 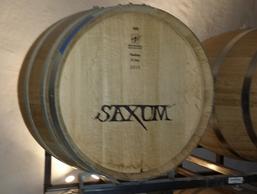 For additional photos of Saxum, be sure to visit our Paso Robles Photo Album! 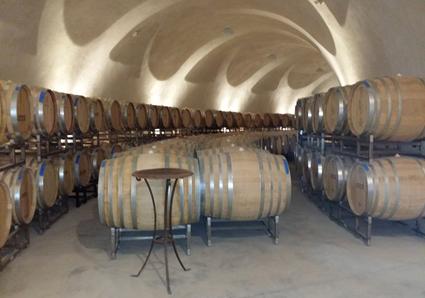 After asking Justin our questions and enjoying the two amazing bottles with him, he honored Michael and I with taking us around the cave to do a number of barrel tastings. Needless to say, that was a real treat and an absolutely AMAZING experience!  Everything, and I do mean EVERYTHING, was nothing short of fantastic!  So good in fact, that we were kinda hoping for an earthquake to trap us in there for oh, I dunno, say two or three years! 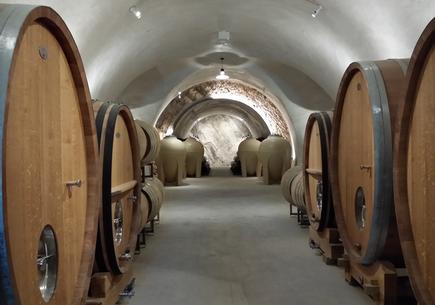 Saxum's production is kept at 4000-5000 cases a year, which is divided between seven different cuvees: Broken Stones; Bone Rock; James Berry Vineyard; Booker Vineyard; Paderewski Vineyard; Heart Stone Vineyard; and Terry Hoage Vineyard. Saxum's next release will not only introduce an eighth cuvee- G2 Vineyard, which is a 2014 Grenache/Mourvèdre blend, but will also feature the rare return of his Rocket Block 100% Grenache (2013), which he hasn't done since 2005. We were fortunate enough to get barrel tastings of both the G2 and the Rocket Block, and they were great! 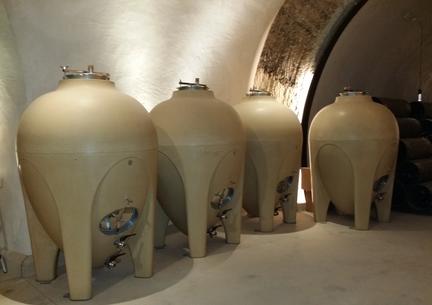 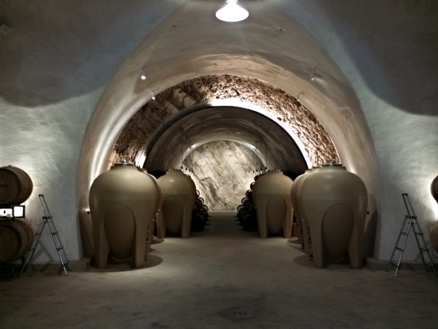 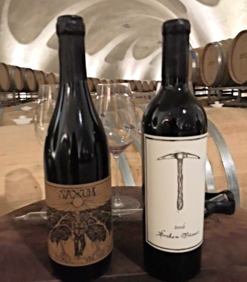 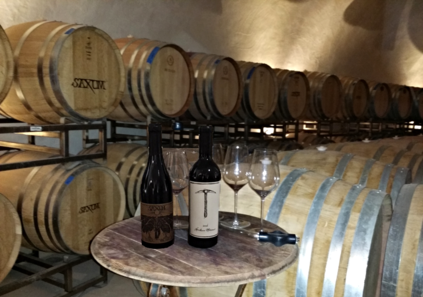 whole thing himself on a paper napkin (love it!).  Interesting side note- most of that region was under water once upon a time, and Justin still finds whale bones in his vineyard! How crazy is that?  In fact, his Bone Rock Vineyard is actually a reference to the whale bones found in the soil.

Joe Kalionzes, who also happens to be his kid’s former teacher.

We asked him if after making a 100 point wine (his 2007 James Berry vineyard), he replicates his process to try to get the same outcome? Nope, he starts from scratch every time, as he's always looking to improve his wines; not make the same thing over and over. But, there is a definite consistency to the quality of his

There is currently a 3-4 year wait to get on Saxum's allocation list, but we highly suggest that you put your name on it  ASAP- you can thank us later! In the interim, we'd like to thank Justin Smith for his time, kindness, hospitality, and his great wines!

And in case you’re curious (like I always am) what a winemaker of his caliber drinks on an ordinary night, like a Tuesday?

Justin's place has been under construction. Apparently he had been previously making his wines in a garage beneath his house, but now he's near completion on building an entire winemaking and storage facility, along with a private tasting room, on the property.  He gave us a really great tour of these magnificent and beautiful caves, housing hundreds of barrels and several extremely large, custom-made Amphora (aka ceramic vats).

My first experience with Saxum was when I received a bottle of 2009 Saxum- Paderewski, three years ago for my birthday, from some dear, and obviously amazing friends. Admittedly, I did not know the extent of their generosity at the time, as I had never even heard of Saxum. I opened it at a steakhouse in Beverly Hills, Wolfgang’s, with my mom, as we were celebrating our birthdays together. The sommelier gave a rather large nod of approval and admiration for our choice of wine to accompany our dinner. It did not disappoint, as we were both completely blown away by it! It was so good, in fact, that I

Justin grew up in Paso Robles and had no intention of becoming a winemaker. He did, however, help his father with tending to the vineyards, and made a barrel of wine a year for fun. He left Paso and went to college at Cal Poly to study Botany. Here, he would meet Matt Trevisan, his college roommate and future partner in Linne Calodo. Linne Calodo was Justin’s first winemaking endeavor that he and Matt formed in 1998, after leaving college and coming back to Paso Robles. The partnership lasted a couple of years, and then they decided to part ways. This is when Justin went out on his own and formed Saxum. Matt still remains at Linne Calodo.

Justin’s first vintage for Saxum was 2000, and his wine took off nearly immediately. Regarding his success, he gives most of the credit to the fruit. His vineyards produce top quality grapes due to being in the unique Willow Creek AVA.  Willow Creek receives more rainfall then the rest of Paso Robles, which can be very hot and dry, with most wineries using dry farming (no irrigation, they rely on rain water solely). Not only do his vineyards get more rainfall, they are also cooled by the marine air that flows through from the Pacific Ocean.  He also credits the rocky calcareous soils, steep hillsides, and sunny days, which keep the yields low. Everything is done organically; no pesticides, no herbicides, and no chemical fertilizers.

But of course, there is no doubt there is a magic touch with his winemaking. It all starts with the picking of the fruit, all done by hand, making sure each grape is ripe and ready. A couple of his buddies help him out with harvesting and he gives them fruit in return to make their own wines (Notably Turtle Rock and Ledge). He racks on the lees, which is a unique technique, and he does it because he feels it protects the integrity of the fruit, and he knows the fruit can handle it.

Justin went over to the far end of the cave, where there were stacks of drudge pipes. He uses these in a very unique way- to store his bottles of wine!

His wines are bottled unfined and unfiltered. 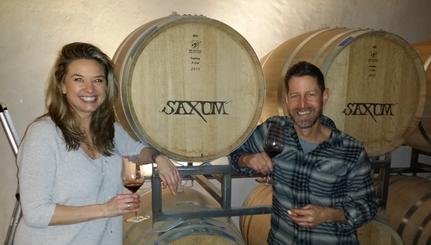 Then we all just started drinking and chatting. We had some pre-written questions for him (as we're still a little green at this interviewing stuff and didn’t want to forget anything), but for the most part, the conversation just flowed as we discussed Justin’s start and journey in winemaking. 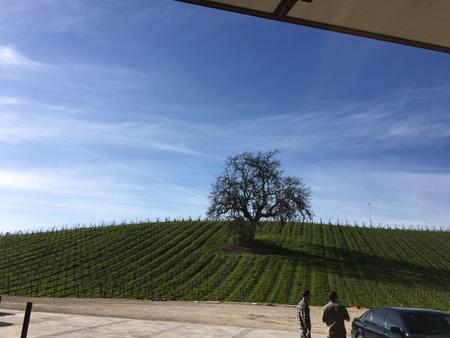 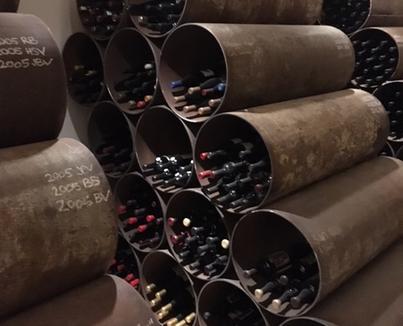 The architecture is gorgeous; lots of natural shale, as they built right into the mountain. Our pics probably don’t do it justice. The magnitude of the space was unbelievable. Justin designed the

quickly sought out and bought another bottle, but this time from another vineyard, James Berry, 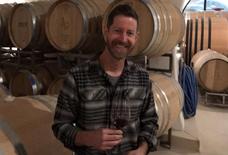